Posted by Dave Updegraff on April 13, 2011
Posted in: Uncategorized. 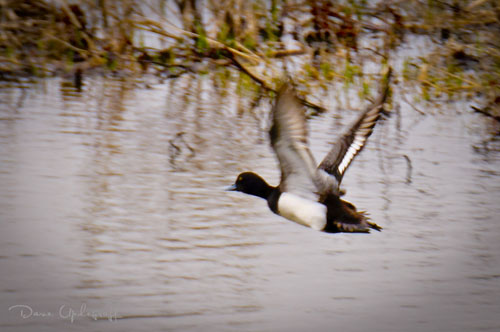 Today I finish up the Green Island shoot with some wildlife shots.  I continue to struggle with getting tack sharp images of wildlife.  Partly because of the lighting conditions, equipment shortcomings, but mainly lack of skill in shooting wildlife.

The good news is I can wait for the lighting conditions to improve.  Not much (for the foreseeable future) I can do about the lack of lens quality, but for the lack of skill issue I can keep practicing and eventually I will get better.

The image above is of a Lesser Scaup in flight.  He was taking off and I was zooming and panning at the same time so I didn’t get a great image of him.

This Blue Heron was fairly static the entire time I was taking his image.  Unlike the Sandhill Crane who was moving all the time.  On this shot what I would have done differently is use a higher ISO maybe 400 / 800 and used a lower f -stop maybe 5.6.  That would have helped get  my shutter up around 1/350 / 1/500 sec and would have given me a sharper image.

Last shot of the day is the Sandhill Crane again.  I shot about 150 images of this particular Crane and for the most part he was moving.  He would stop, stand up straight, look around and then he would be off again.  There were three Canadian Geese in the area and they didn’t seem to mind each others presence.

That’s it for today.  Thanks for stopping by.  I hope to have some new stuff for you tomorrow.  Remember be careful.