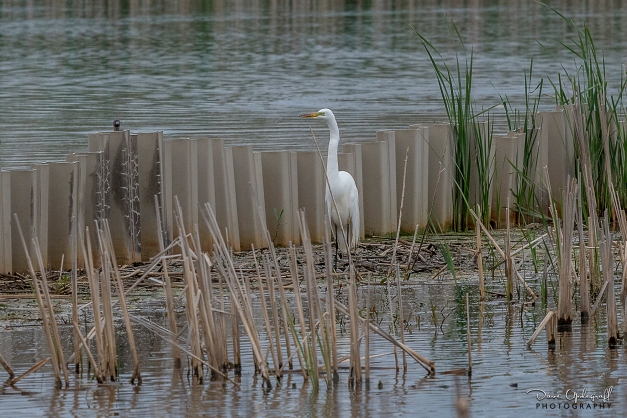 I have three images for today.  I was on my way back to my office after visiting one of our banks, when I passed this small marsh and saw a Great White Egret.  He was a little farther away than I like, as I only had my 400 mm lens.  I took this image and was prepared to move on but then  he dove his head into the water and came up with something of some size.

He had caught a pretty good-sized fish, relatively speaking.  I watched him for about 10 minutes and took a hundred shots but he never did get the fish down so this image is Representative of the other hundred.  🙂

While I was photographing the Egret this Canadian Goose was quite vocal making it clear that I was infringing on his territory.  So I obliged him by leaving but not before capturing his image. 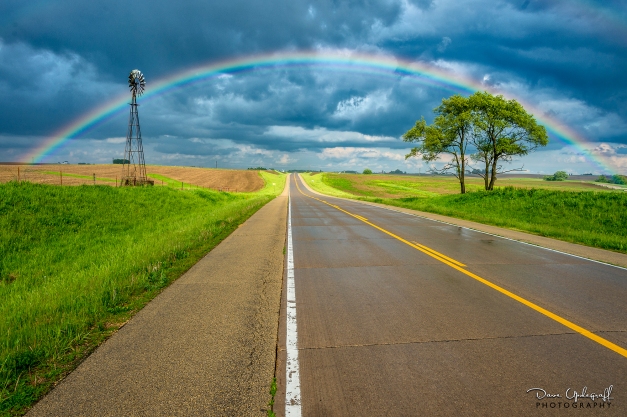 Saw this beautiful rainbow on the drive home last evening.  I had to stop and capture this image even though it was raining. 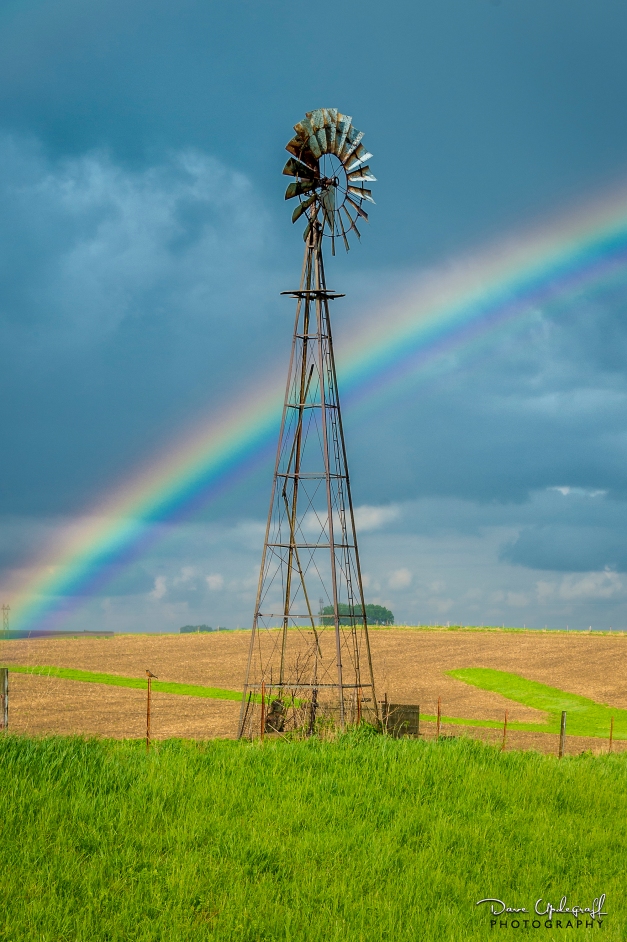 My favorite windmill with the rainbow.

We were in Des Moines over the weekend to attend the wedding of David and Tori.  David is the youngest son of Mike and Mary Rowley and Mary is Jeanne’s sister.  So now we have that out-of-the-way, what if anything does all of this have to do with this beautiful Alaskan Husky?

Well I was getting to that.  This is Rizzo named after the Chicago Cubs’ baseball player.  Even though Rizzo, the dog is a female, she carries the name of her owner’s favorite player.  Rizzo is the beloved dog of her owner Mike Rowley who is the older brother of David.

Now that I’ve given you way more family information than you could every want to know I bid you adieu.

I have three images for today.  Yesterday was a miserable day weather wise.  Constant rain, temperature only about 42 degrees and windy.  Not a good day for photography.  I had an appointment to get my hair cut yesterday morning and then an hour to kill before meeting my good friend Mike for lunch at Mario’s Italian Restaurant.  One of my favorite places to eat in Dubuque.

Even though the weather was unfavorable for photography I decided to drive down to the river to see what was going on.  As luck would have it there were two large barges parked one in front of the other waiting their turn to lock through the dam.  I have never seen that before and decided on my return trip I would capture some images.  I drove on to the lock and as I pulled into the parking lot there was a turkey vulture sitting on the asphalt.  I have never been that close to one of them before.  Now the camera is in the back seat still in the bag, it’s raining hard, and the vulture is giving me a close look.

Sure enough when I stopped the car he started unfolding his wings and as soon as I opened my door to get the camera he flew a few feet away to a large rock.  Not too bad, still well within range of my big lens.  Just got the camera out and a train came though.  The tracks run between the bluff and the parking lot, so away he flew and I couldn’t find him after that.  😦

This lonely pelican was floating near the lock so I thought I would capture him since I already had my long lens on the camera.  Back in the car, I dried off the equipment and then headed out to see if anything was going on at McDonald park.  Of course I had forgotten about the two barges sitting there.  It  was raining harder and I’ll admit I didn’t want to get out and change lenses in the rain.  So I just continued on my way to the park.

The only thing I found of interest at the park were some Common Grackles feeding on some berries.  They looked miserable in the cold rain but at least I was able to photograph them from the dryness of the car.  🙂

Do you get the idea that I’m somewhat of a fair weather photographer?  I don’t mind getting wet but I don’t like getting my gear wet and of course I forgot to pack my rain pouch for the camera.

Anyway it was time to meet my friend for lunch.  We had a great lunch with wonderful conversation and a few self-deprecating jabs.  Then home for a nap.  🙂

I have three snapshots for you today.  We celebrated Mother’s Day by having a picnic at Eagle Point Park with Angie, Ben, Mark, and the Grand Kids.  Been a long time since I’ve been to a picnic.  Ben offered to do the grilling on this obsolete charcoal grill, which proved to be quite the challenge.  He did a great job the burgers and brats were prefect. 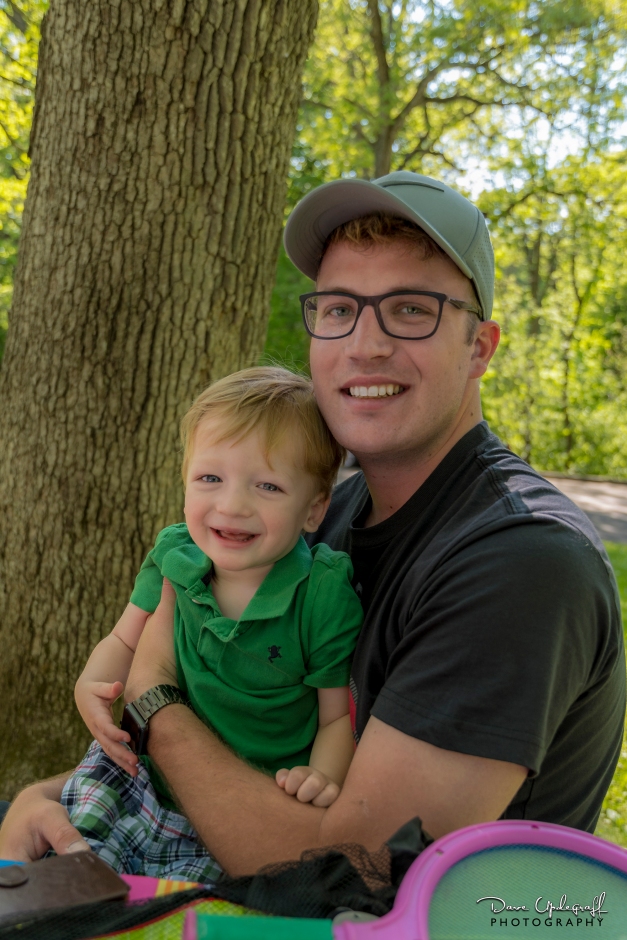 Considering it was a celebration of Mother’s Day I don’t have any images of the two Mothers.  I didn’t take many shots as the kids wanted to play.  🙂

After the picnic we stopped at the DQ near the park and stood in line for a long time to get an ice cream treat.  It was a fun day and a great way to honor these two wonderful women in our lives.

None of us would be here today if it were not for our Mothers.  🙂

Enjoy this glorious day and be careful. 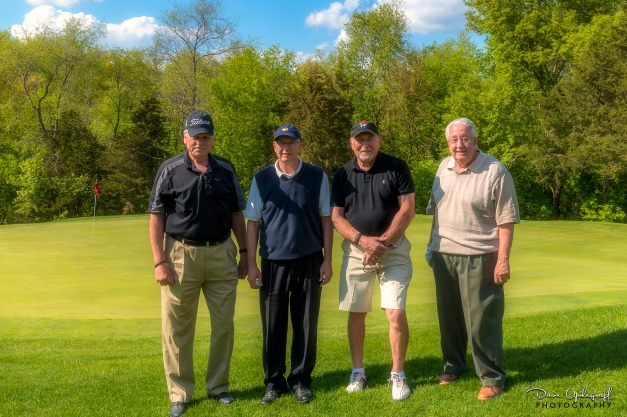 I have four images for you today.  Yesterday I took a PTO day and played golf in an event at Thunder Hills Country Club.  The group above is me, Dr. Mike Ward, Randy Sirk, and my great friend Mike Stoll.  Mike Stoll hosted us at the event, which was 18 holes of golf and a steak dinner.

The company was great, the golf course was in pristine shape, and the weather was perfect.  The golf, Ugh, not so much!!  If I were to design my perfect weather day it would have been the day we had yesterday.  Just enough breeze to keep the bugs at bay.  Big billowy clouds, deep blue sky, no humidity, and a temperature of 69 degrees.  Perfect (at least for me!) 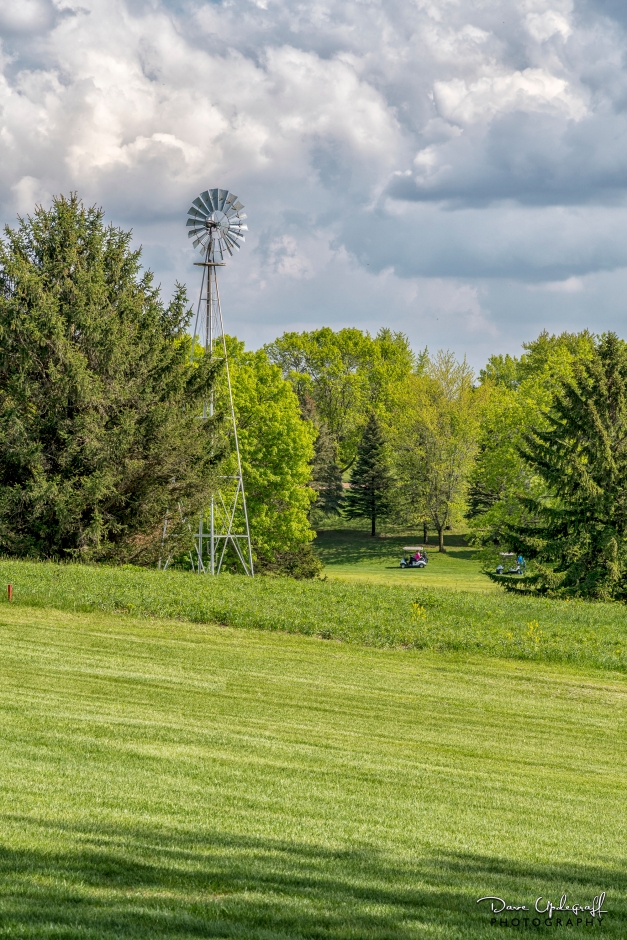 I love windmills and they even have this great windmill on the course.  I couldn’t pass up a chance to photograph it.

Mike Ward and I rode together and every once in a while I’d have to stop and make an image.  He commented about my photography and I told him, “Truth be told, I’d rather photograph a golf course than to play golf on it.”  Being a golf lover he had trouble understanding that.  🙂

Not counting my game the day was as perfect of a day as a person could want. 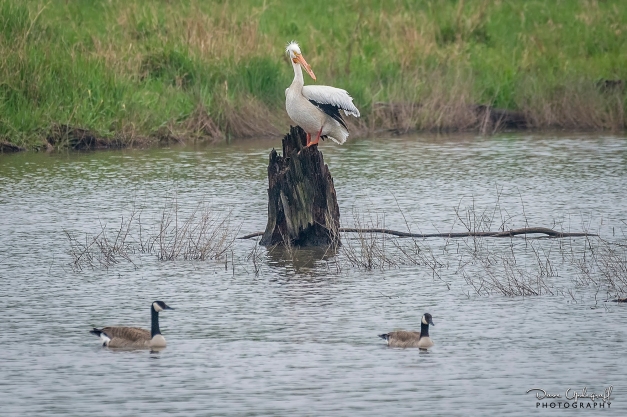 Now this is something you don’t see every day.  A pelican sitting on a tree stump.  I was driving past the “Duck Pond” on my home last evening when I saw this guy sitting on top of a dead tree stump.  It was getting late, misting, and gray but I had to stop for the photo.  I shot this at ISO 3200, which is higher than I normally like to go but to get the shutter speed (thus sharpness) I wanted I was forced to go that high.

I appreciate the geese swimming by in the foreground.  🙂

A quick post with only one image today.  I captured this image of three friends I use to play a lot of golf with.  Bob, Dennis and Dan.  It was fun to see them again at the surprise party for Angela Osterkamp last Friday evening.

Unlike me they still play a lot of golf and I have to admit I miss the comrade and banter we use to enjoy.

Only one image today.  I was out looking for the new baby owl that my friend Andreas has been photographing.  Couldn’t find him and as we were sitting by the canal this red-winged black bird landed and was really squawking at us.  So I took his picture.  🙂