Only one image today.  I was out looking for the new baby owl that my friend Andreas has been photographing.  Couldn’t find him and as we were sitting by the canal this red-winged black bird landed and was really squawking at us.  So I took his picture.  🙂

I have three random images for you today that represent a photo trip that Jeanne and I took yesterday afternoon.  Went to all of my usual places and couldn’t find anything worth photographing or at least that caught my interest.

I captured this image because I have never seen someone wearing pink, ice fishing before.  I think that it is interesting that they have a fishing pole in one hand and their phone in the other.  A sign of the times.  🙂

I have some friends that are in Jamaica right now and they have posted some great pictures of that beautiful place on FB.  I have this little squirrel foraging for food at the Mud Lake Park.  🙂

Obviously I need to get out more. 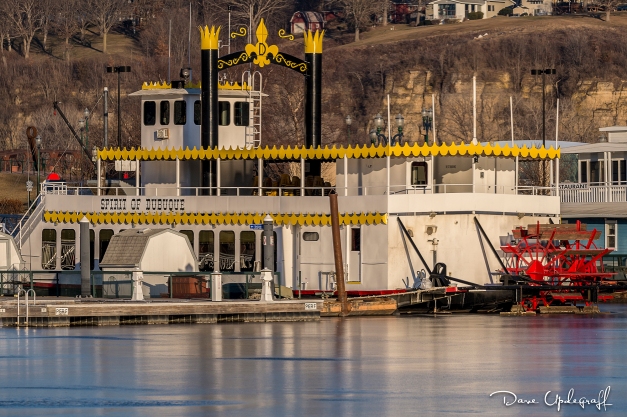 Finally I’ll leave you with this image of the Spirit of Dubuque excursion boat.  I have photographed it many times over the years but the way the light was bathing it in the soft yellow glow appealed to me. 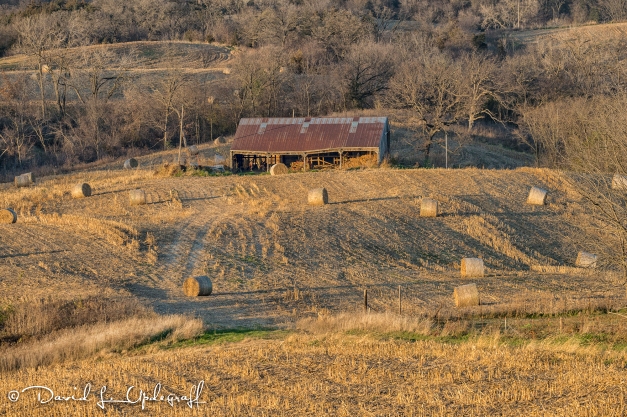 I have three images for you today that have no relationship with each other.  I captured them last Monday on my Photo Odyssey and I selected them today because they each appeal to me for a different reason.  Remember you can click on the image to reveal a larger more detailed version.  🙂

Of course if you follow this blog for any time at all, you are aware of my love of farm scenes and harvest images.  I went past this old machine shed with all the corn-stalk bales in the field.  It was near the end of the light and I had to make an image.

I also enjoy making image of the great Mississippi River.  This is a section of the river near Mud Lake.  It was here last year that I got a picture of a Fox walking on the ice looking for lunch.  That is the closest I’ve been to a Fox but it is my goal this year to get closer. 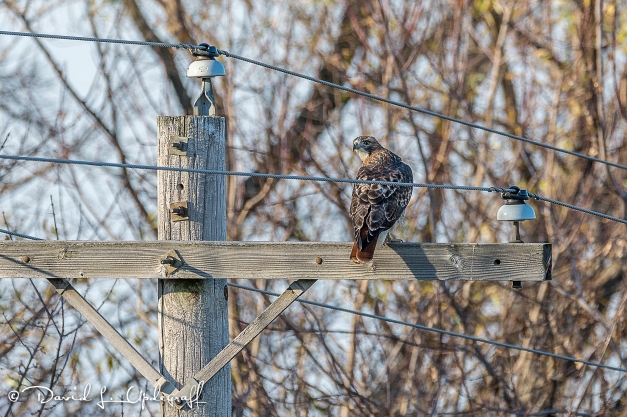 Finally I will leave you with this poor (composition wise) image of a Red-Tailed Hawk.  I came over a hill and saw him sitting on the phone poll.  Making sure there were no cars coming (I could see a long way) I got the D4 and my 600 mm lens ready and dove as slow as I could until I could get a photo of him.  A second after this image he took to the air.  As long as a car is passing at normal speed they pay it little attention, but if you slow down they will depart the area in a hurry.  🙂

Only 19 degrees this morning in my little part of the world.  Supposed to get up to 40 so I hope to get some more images today. 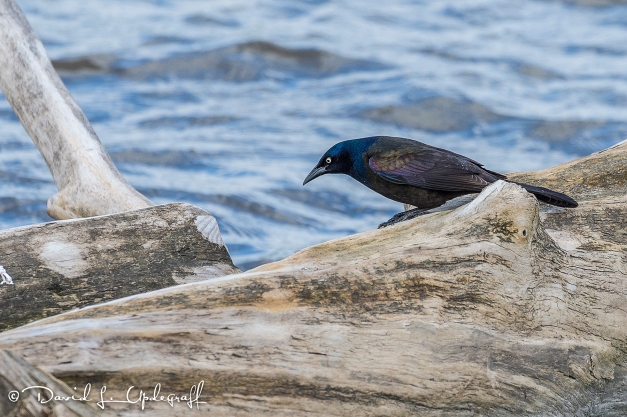 I have some random images for you today that have nothing in common, other than I like them all.  🙂

The Common Grackle is “common” in these parts and we see them all the time.  I love the piercing eyes and iridescent coloration of the bird.  I captured this image at Mud Lake Park, where along the shore line there are lots of dead trees that have been carried by the current to their final resting place.  There were several grackles foraging for food and I couldn’t resist making some images of one of my favorite birds.

You can click on the images to make them larger and see more detail.

The ubiquitous American Coot.   “The American coot, also known as a mud hen, is a bird of the family Rallidae. Though commonly mistaken to be ducks, American coots belong to a distinct order” (~ source Wikipedia.)  I made this image at Green Island a couple of weeks ago.  They are everywhere at Green Island and although some people find them to be a nuisance I personally enjoy watching them interact with their environment and each other.

Finally I’ll leave you with this landscape I capture yesterday at Twin Springs bridge.  It caught my eye on my way to Bankston, Iowa so on the return trip I stopped and photographed it.  It use to be much prettier before the flood of a few years ago.  The raging waters from that flood rearranged the stream and left some debris in its wake.  Still on a cloudy afternoon I’m pleased with this image.

I haven’t been doing much photography the last few days as is evident by the lack of posts on this blog.  I intend to correct that moving forward.

Yesterday afternoon Jeanne and I went on a photo drive.  Visited a lot of our favorite places and there just wasn’t anything worthy of an image.  Friday evening I was standing on the back patio and saw a large flock of pelicans flying over.  I reasoned that they would be at the 16th Basin or at the River on Saturday.  We found three pelicans floating in the middle of the channel.  Much too far away for a photograph.

My friend Andreas has been photographing and following an owl at the Mud Lake Park North of Dubuque.  She has hatched two owlets this year so we drove up to the Mud Lake area hoping to catch a glimpse of the owl and her offspring.  She was nowhere to be found and the young ones must have been hunkered down in the nest.  We watched for a long time but nothing.

We did find these Blue-Winged Teal swimming around.  So we watched them for a half hour or more.  Lots of fun watching any wildlife interacting with its environment.  You can click on the images and make them larger for better viewing.

I have a project I’m going to try tomorrow.  I have a 2011 Mac Book Pro that I bought new.  It was blink fast speed when it was new and now is so slow I stopped using it.

I put a new battery in it and have had some other issues but it’s a great computer and I hate to get rid of it.  So while doing a Google® search on how to speed up a Mac Book Pro the central suggestion was to replace the original hard drive with a SSD hard drive.  There were several videos available to demonstrate the process so I’m going to try it tomorrow.  I’ll let you know how it goes.  🙂

I have some random wildlife images for you today and none of them are eagles.  🙂

Busy work week didn’t leave anytime for photography.  I hope to correct that today as I get out and see what there is to make images of.

I made these images last Monday at Mud Lake Park, North of Dubuque.  I saw this little squirrel scurrying about but didn’t realize he had a nut in his mouth until I got the second image of him when he climbed a tree.  The first shot is of him playing hide and seek with me, hoping that I had gone away.  🙂

“Any port in a storm.” Gulls rest and sleep on a thin piece of ice floating in the back waters of the Mississippi.

I can never pass up a chance to photograph Mallard Ducks.  They are such a vibrant, beautiful, and colorful bird.

That’s it for today.  Hope you enjoy your day and as always be careful. 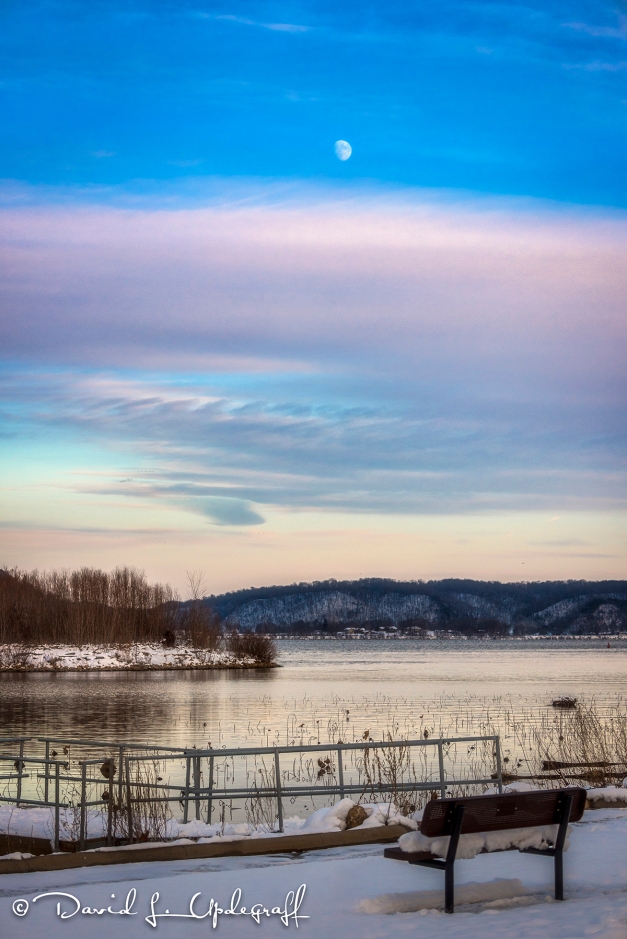 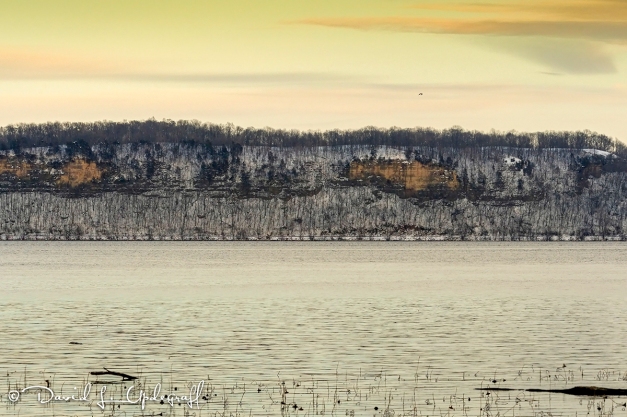 Happy Monday.  Yesterday, as is our normal Sunday evening custom, Jeanne and I took a photo drive.  She wanted to go up to Mud Lake Park and see if we could see any wildlife.  It is a pretty drive and we hoped to see some Fall colors, although it is a bit early for that, some of the trees are starting to show some color.

The wildlife consisted of some Canadian Geese, who insisted on remaining in the shade near the bank o the river so that about all I could get was a silhouette of them, some gulls that were too far away to shoot and then I happened to see this Blue Heron slowly stalking up the side of the canal looking for dinner.

I watched him for 30 minutes, taking one slow step at a time, getting his head very close to the water and then stabbing at the water.  Several times he came up empty but on this particular attempt he got a small fish for his efforts.

I love to watch Herons hunt for food.  They are usually pretty timid and fly at the first sign of a human but he was deeply engaged in his hunting so he didn’t seem to mind me clicking away.  Just as we were leaving I saw some more movement from him and when I put the camera lens on him I saw that he had a pretty good-sized fish in his mouth.  He was really fighting with it and I got a few shots but they were blurry and not very good.  He was shaking his head and moving to shore because as the old adage goes, “he had bit off more than he could chew.”  🙂

That’s it for today.  I hope you have a good day and thanks as always for stopping by the blog.  Be careful.