I met a dear Friend in Manchester yesterday for lunch.  We’ve been close Friends for 43 years.  We can go a couple of years and not visit and then when we do get together it is like we talk everyday.

On the way to Manchester I saw 6 eagles sitting in trees and one on the side of the highway eating some road kill.  I was so tempted to stop but I was running a little late anyway and I knew if I stopped and tried to get set up with the long lens I was going to be a lot later so I just kept driving.  😦

I have seen this barn many times but have never had time to photograph it.  On the way home I decided to finally get some good images.  I drove up to the house to get permission but there was no one home.  I didn’t want to be wandering around their farm and have them come home so I went back to the side of the road and waded through a little snow to get this image.

As I turned around and headed for my vehicle I noticed this juvenile eagle perched on top of this pine tree.  All I had with me was my Nikon 70-200mm  f2.0 so it is not a good image by any stretch, but at least it is an eagle.  🙂 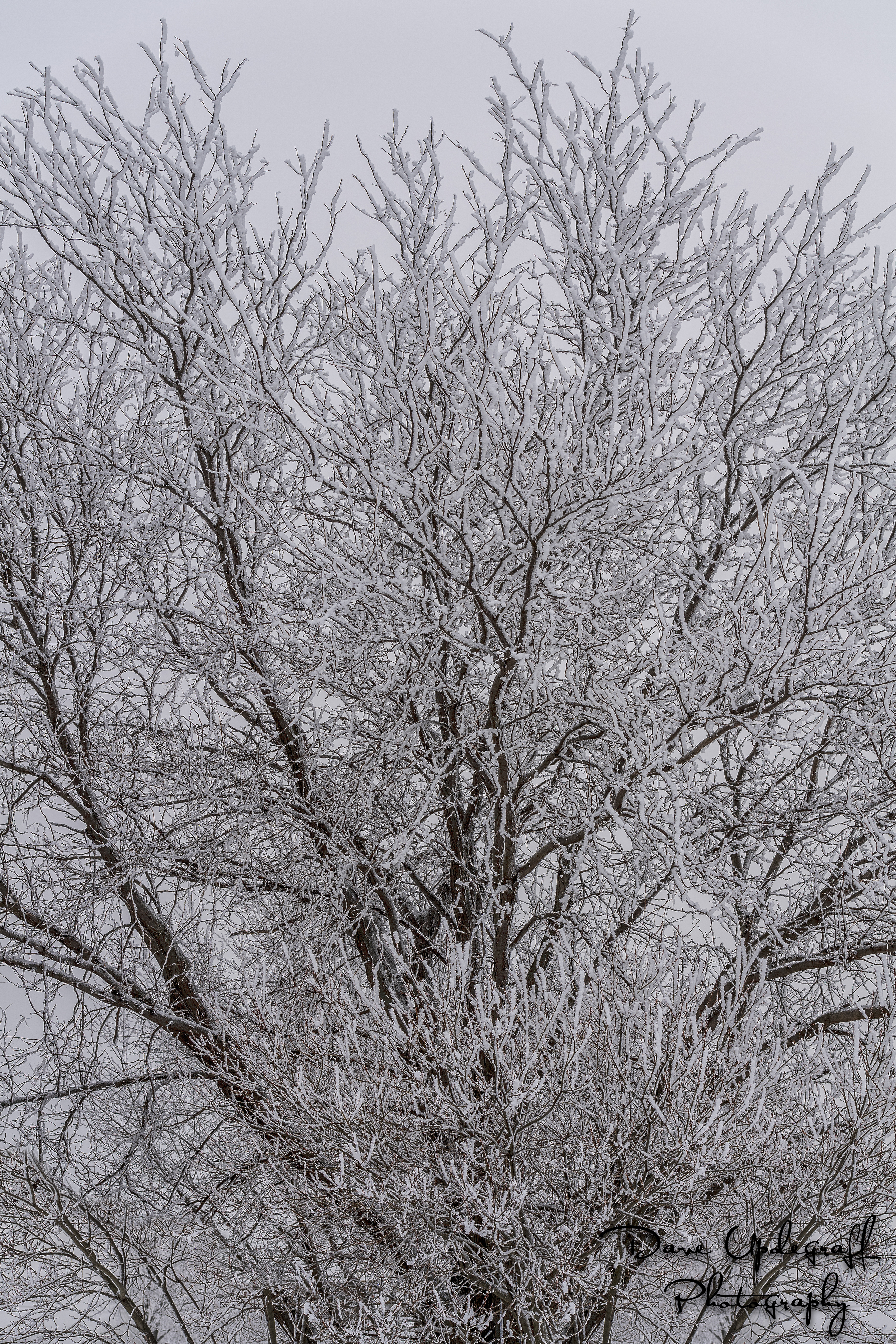 We have had three days of foggy conditions that are referred to as hoarfrost.  (a grayish-white crystalline deposit of frozen water vapor formed in clear still weather on vegetation, fences, etc.)  I have thought about driving out into the countryside to photograph in more detail but took the lazy approach and just photographed our back yard.

When I was on the road everyday (while working) I had plenty of opportunities to photograph lots of areas in conditions like this.  But now it’s just so much easier to just poke my head out the back door and shoot some images. 🙂 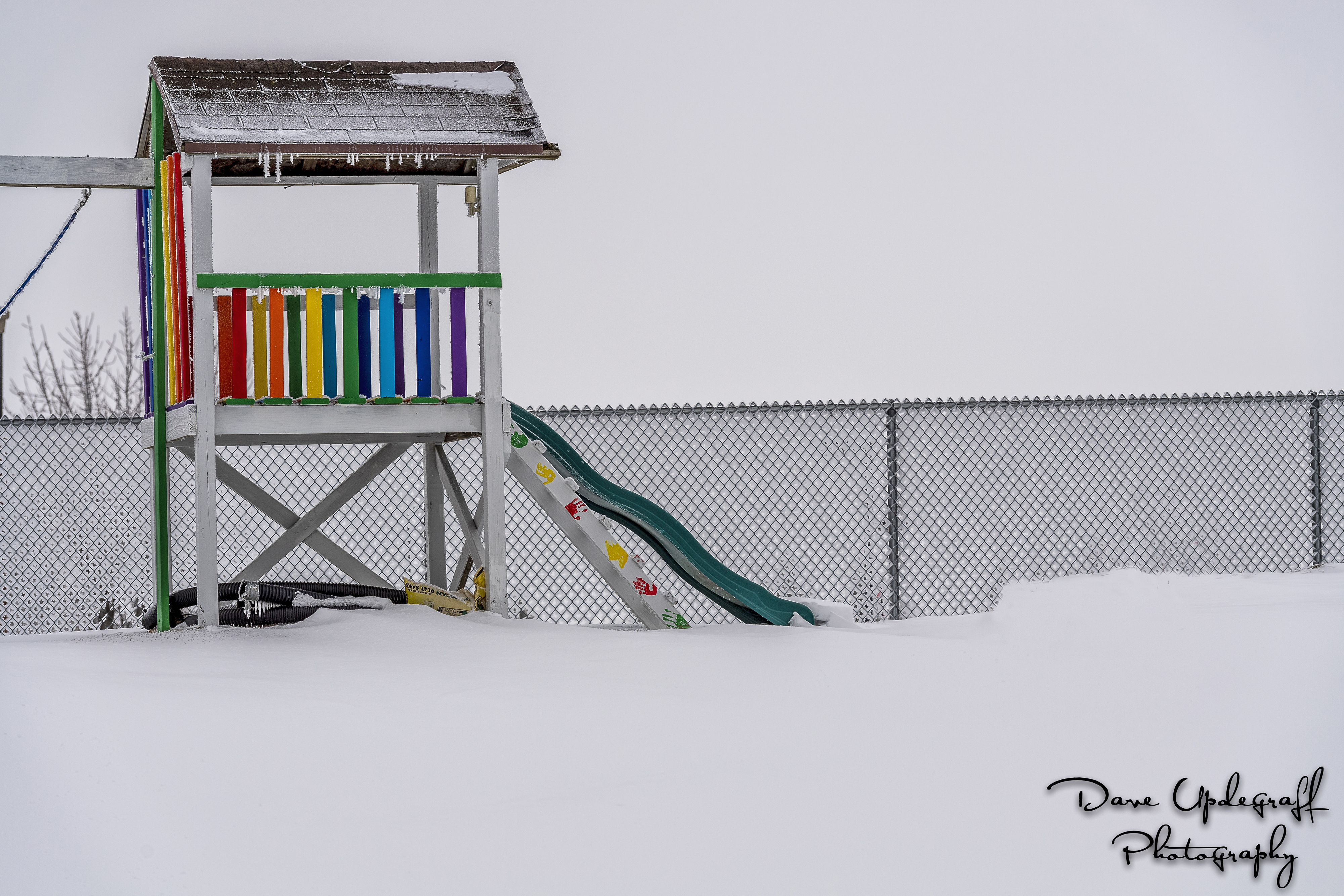 That’s all for today.  Enjoy your day and be careful. 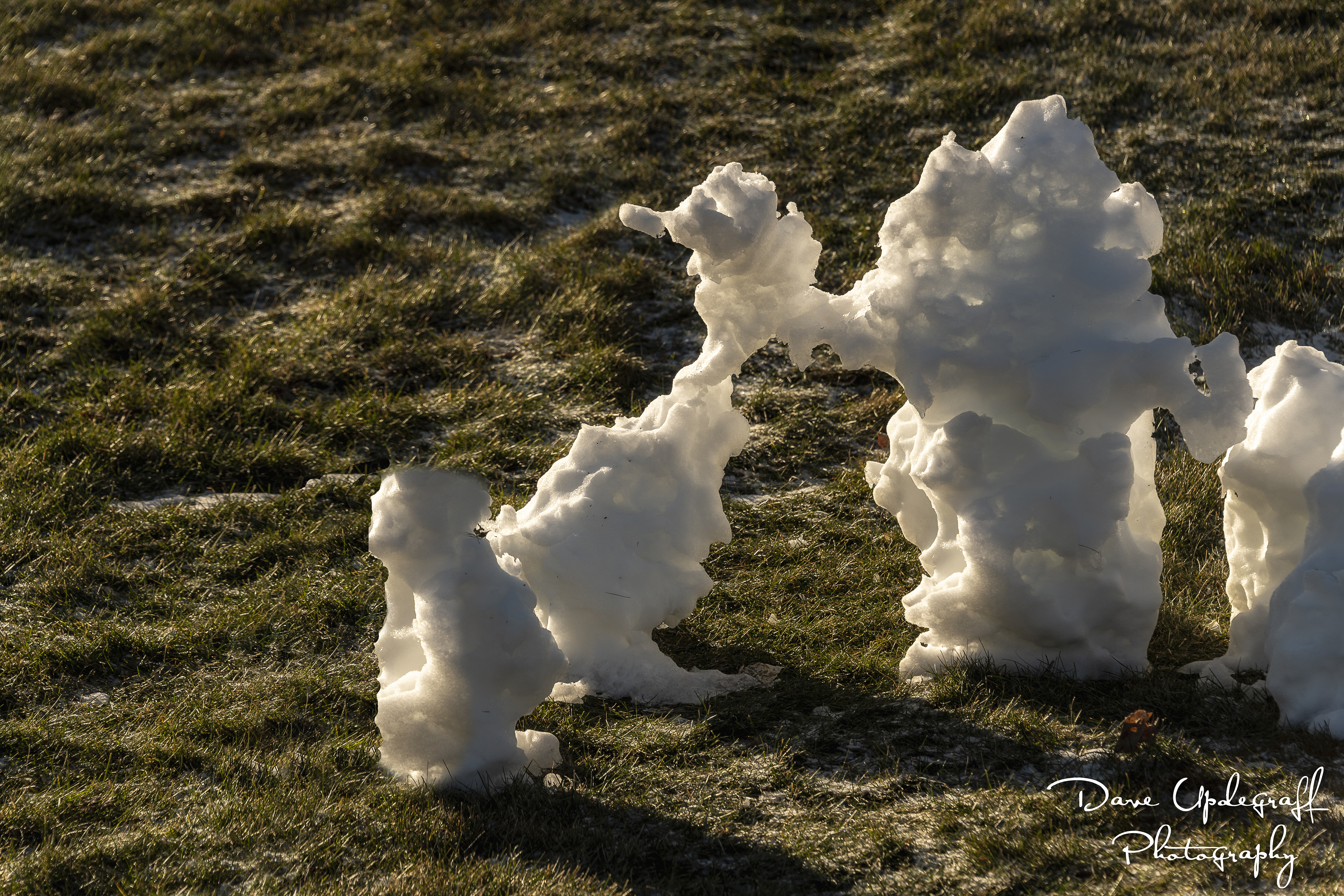 Merry Christmas To All.

A few days ago I posted some images of the Grand-kids building a snowman and a fort.  Soon after that the warmer temperatures helped to melt most of the snow with the only thing left was the remnants of the fort that Angie, Addie, and Gabby built.

Like looking at clouds in the sky and seeing things if you use your imagination you can see a little reindeer kissing and teddy bear.  Well at least that’s what I see.

Enjoy your Holiday and be careful. 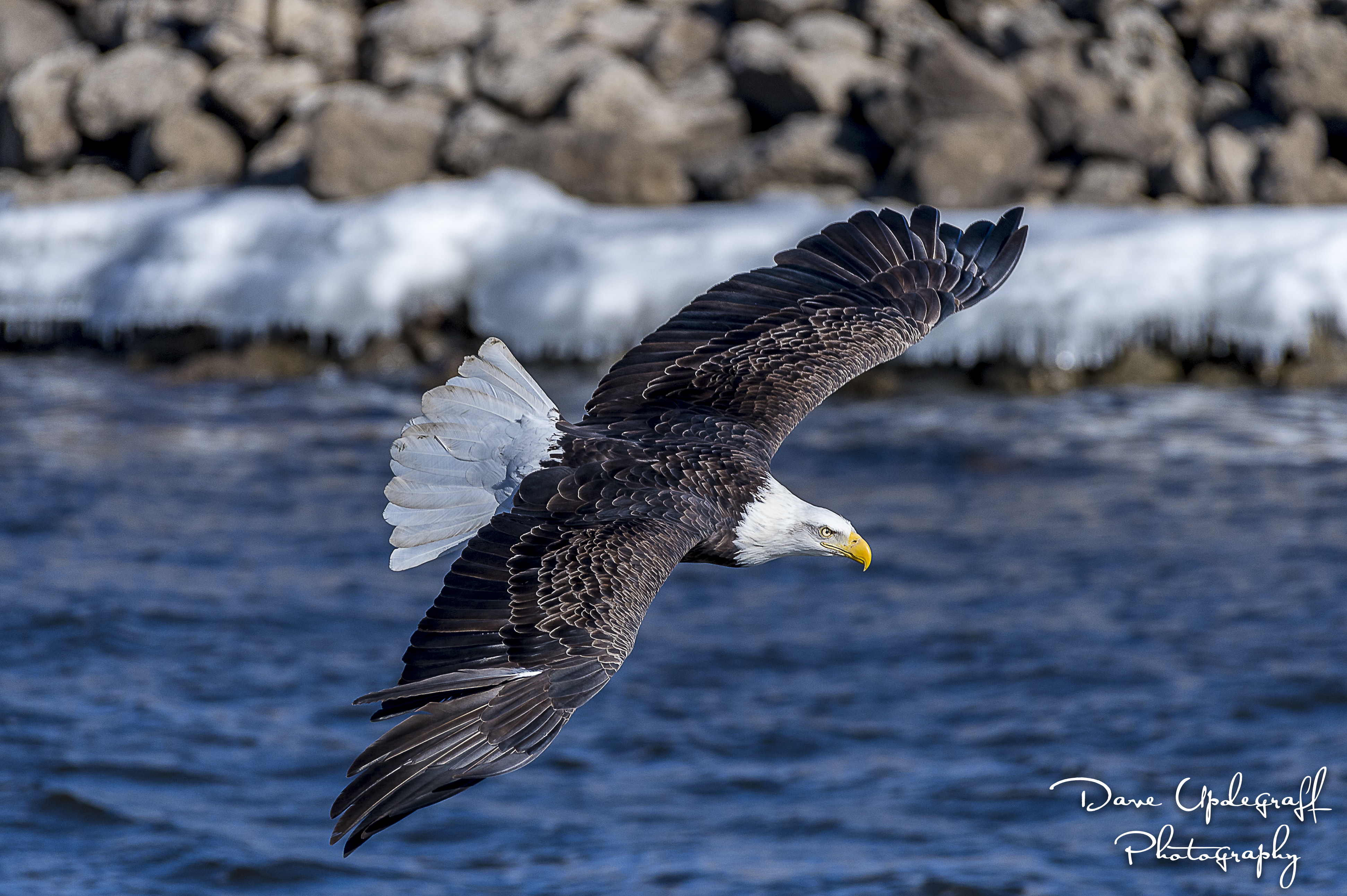 As we approach the end of another year (Thank God) I was looking back at the thousands of images I have of eagles and thought it might be fun to post some of my favorite images.  You can click on all of the images to reveal a larger more detailed image. 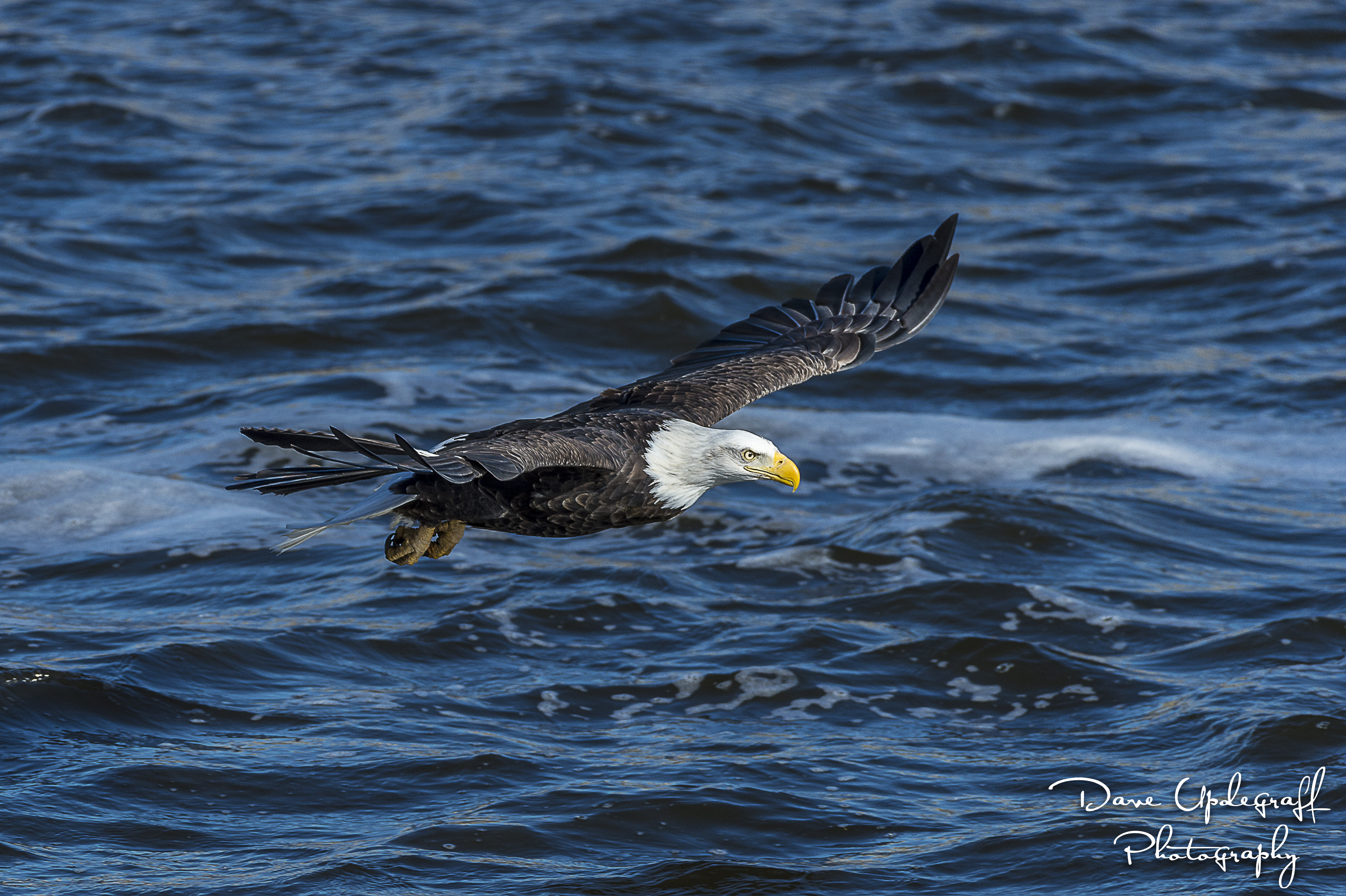 The three images I have for today are all taken of the same eagle and in rapid burst mode.  The Nikon D4S has a very fast frame rate and the day was bright and sunny.  I used the Nikon 200-500 mm lens.

So this eagle got away with his lunch on this day.   I do remember it was very cold and was January 30th 2016.  I was at Lock & Dam 14 in LeClaire, Iowa one of my favorite places to photograph eagles.  Hope to get back there this year. 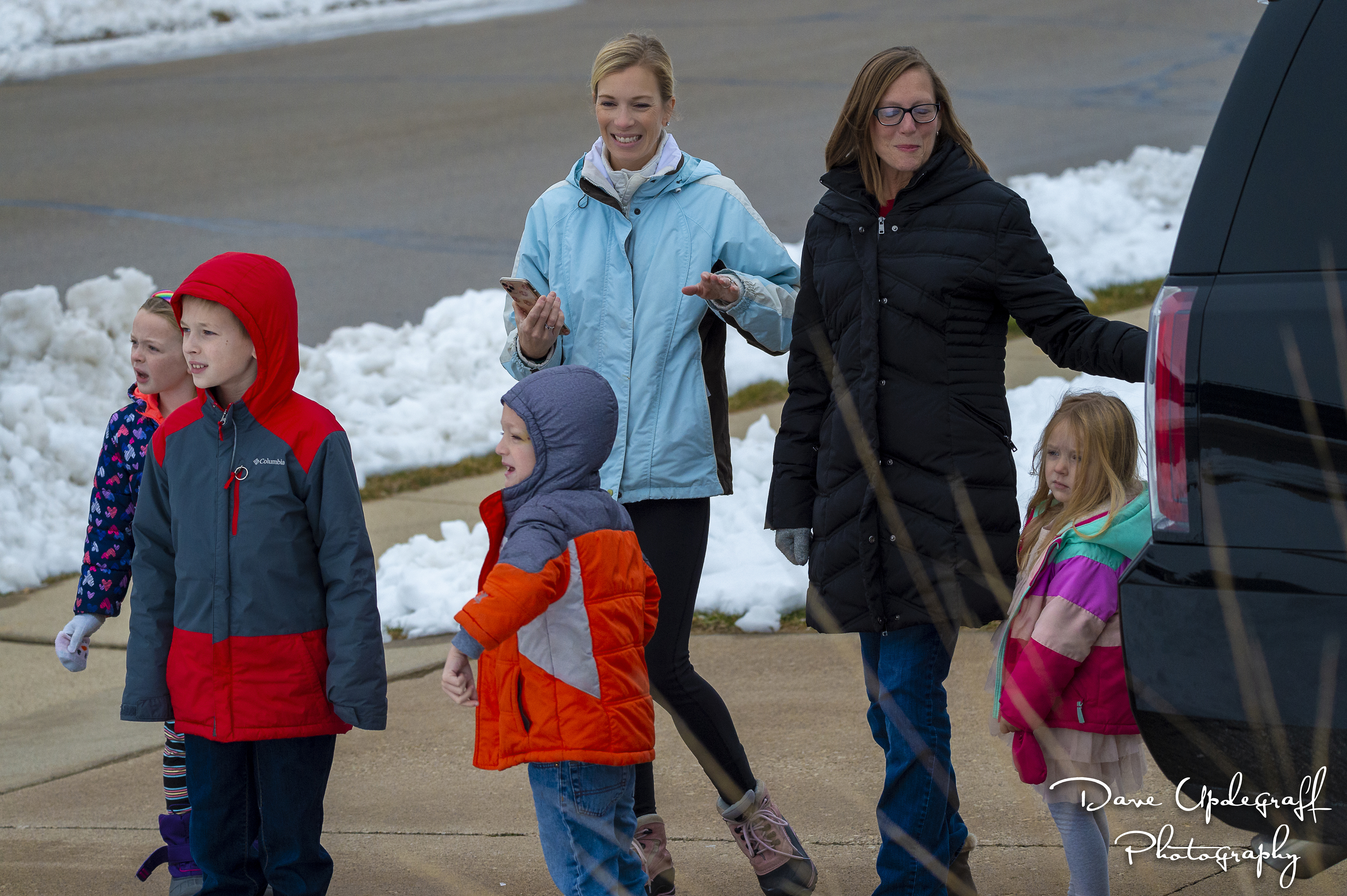 Every year on the Saturday before Christmas the City of Asbury takes Santa Clause around the entire community so that all the children can see him and get candy from him.  When we first moved here in December of 1992 that next day we heard all the sirens and thought something bad must be happening but it was just the Santa Clause tradition.

And so every year our kids looked forward to it and every year Angie brings her kids over.  In fact the entire neighborhood was out this morning to welcome Santa Clause.

Right on time the big fire truck pulled out of the station with lights flashing and sirens wailing and drove right on past all the parents and kids waiting to see Santa.  Ironic as it may seem this was a real emergency run and this truck and another were actually responding to a real event.

A few minutes later the truck carrying Santa came by and the kids were delighted.  I had already gone in by the time it came by so I didn’t get any images of Santa.  😦

After some sledding the kids built a snow man in the back yard and Addie was putting some final touches on it when I got my camera back out. 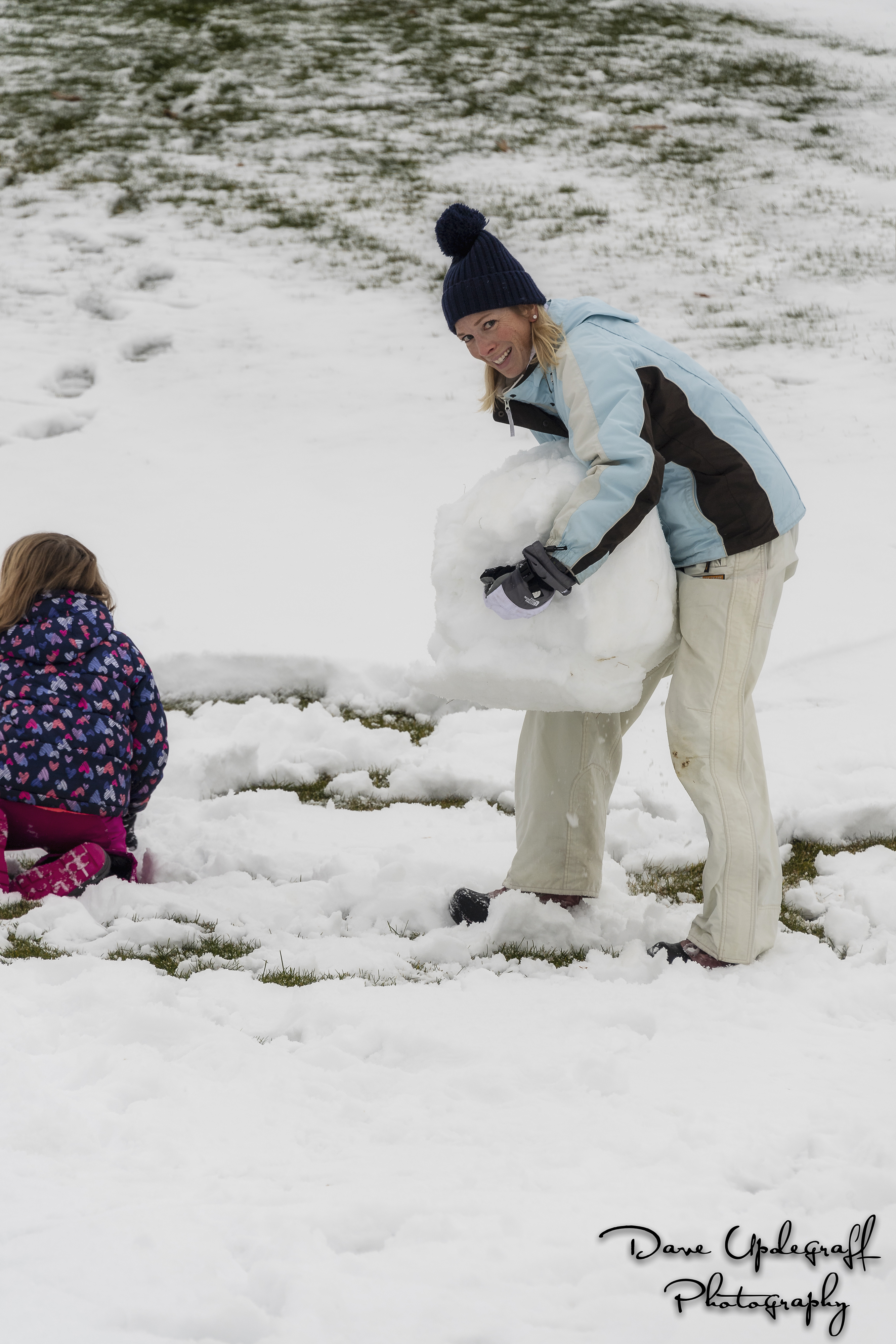 There was more sledding and then the boys built a fort and the girls built a second fort in anticipation of a huge snowball fight.  Apparently it didn’t happen but we still have two large forts in our back yard should an attack happen. 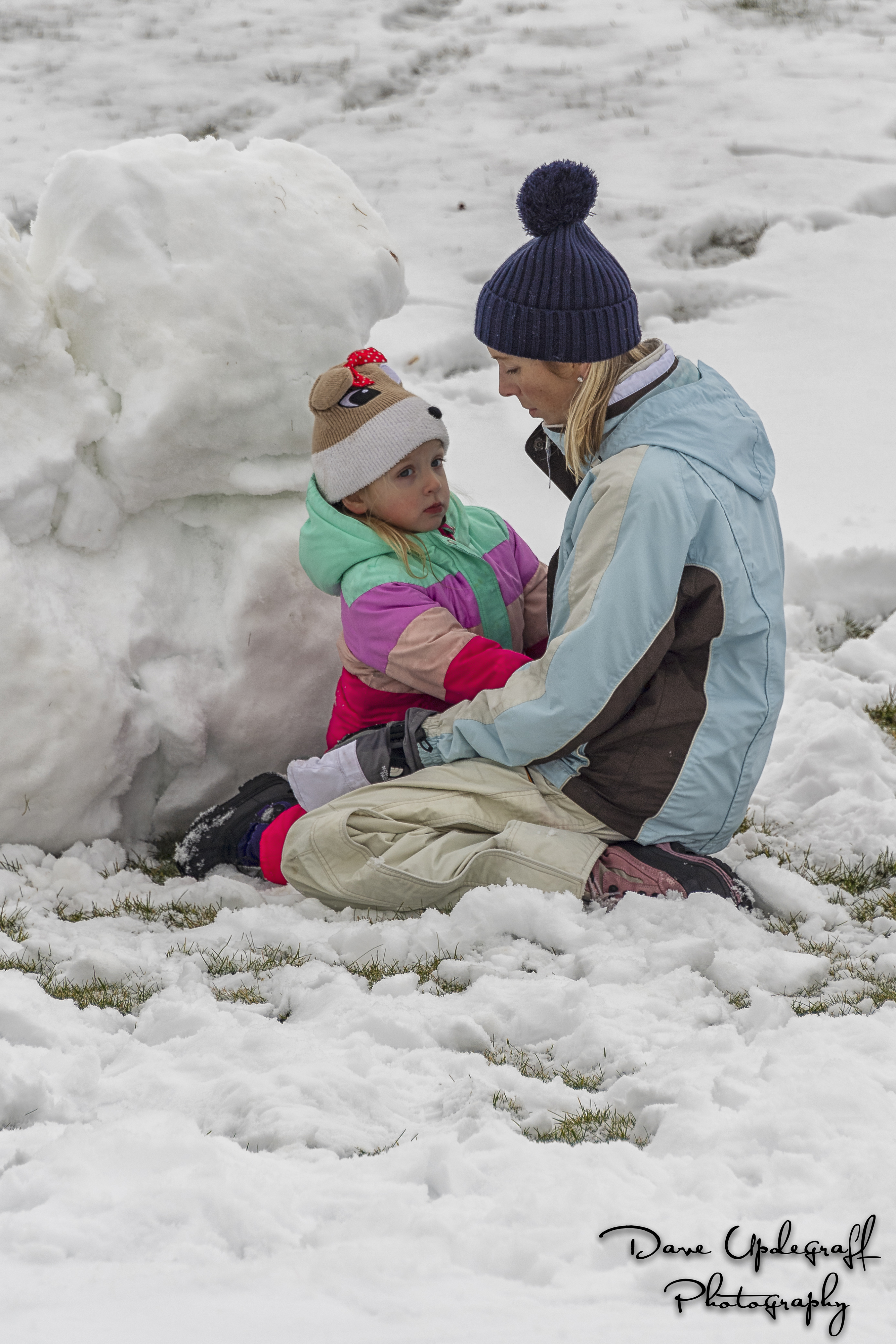 After all the activity of seeing Santa Clause, sledding, building a snowman and a couple of forts, Addie needed a little Mom time.  I couldn’t resist capturing this moment.

I decided to drive down to the river yesterday hoping to see some eagles flying.  I drove into A. Y. McDonald park and sure enough there was a bald eagle floating around the river just a few hundred feet away.  By the time I got my camera set up and ready to photograph I couldn’t find him anywhere.

Then this male duck started coming towards me (I was in my vehicle) and perhaps he thought I was going to throw some food to him.  Many people do that.  They drive down to the ramp and throw out bread crumbs and other food for the various wildlife that congregate there.

He finally came up close to my truck and looked at me like (Where’s the food?)  Well I didn’t have anything with me so he was disappointed and went back to the water.

We had a little house guest sleep over last night and as luck would have it we also had a big snow event.  Probably 8 inches at least and it is still coming down as I write this blog.

If there’s anything that goes together, it’s snow and kids.  The first thing she wanted to do was go out and play in the snow.  “Mama Jeanne” and her went out as soon as breakfast was over.  Grandpa didn’t go out as I’m probably going to spend most of the afternoon clearing this stuff out. 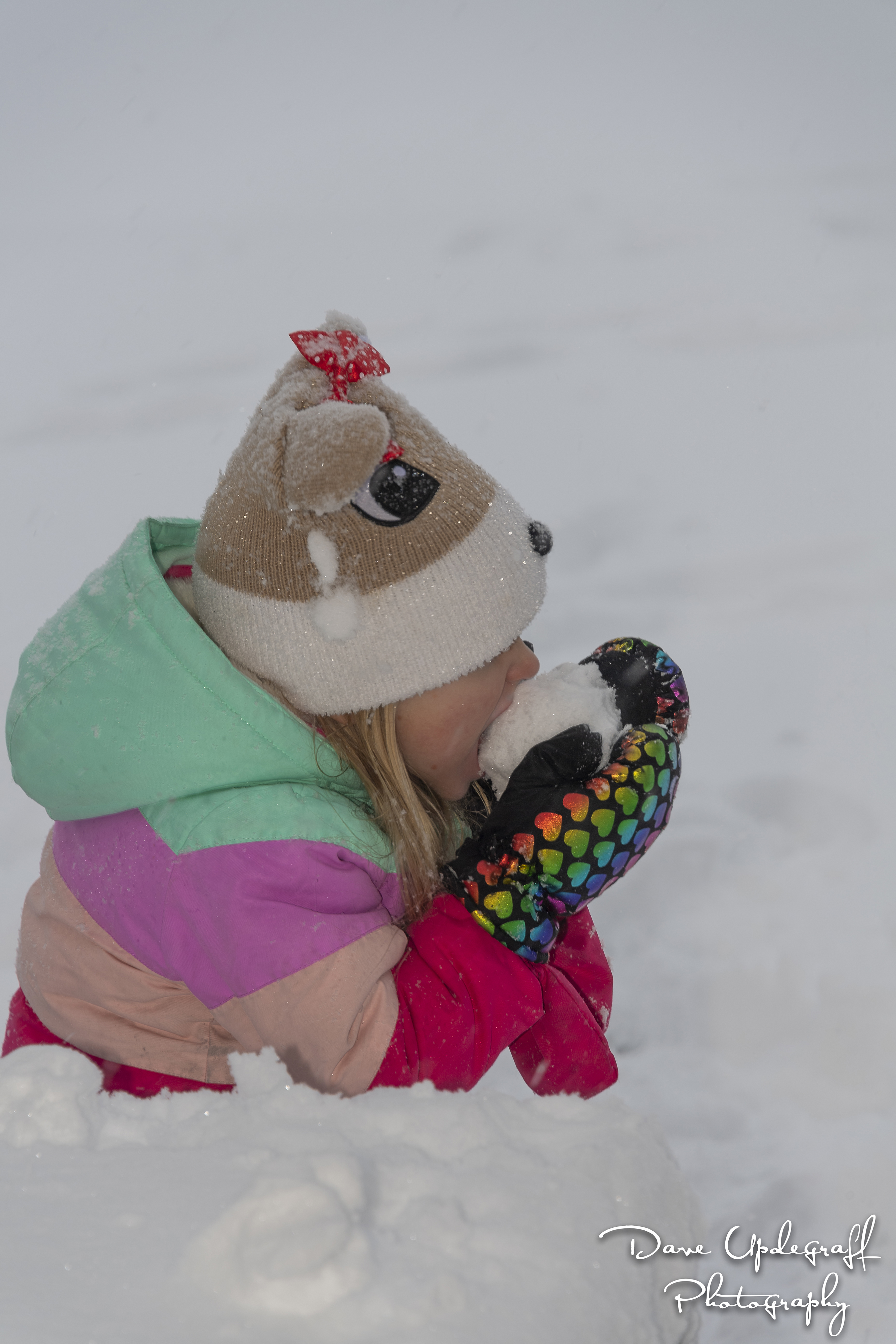 Addie eats more snow than she makes for snowballs.

Love having this little munchkin with us last night and today.

Well I went to Green Island yesterday with high expectations but in the 10 years I’ve been going there this was my worst experience.  I saw a fair amount of wildlife but they were all too far away to get a decent shot of them.

I only photographed these Canada Geese for my friend Betty otherwise they too were too far away.

I spent 4 hours driving the “trenches” and setting and waiting hoping that something would land close to where I was but all for not.  I only took these two images.

I’ve had some wonderful experiences at the preserve and I’ll probably go back sometime but not for a while. 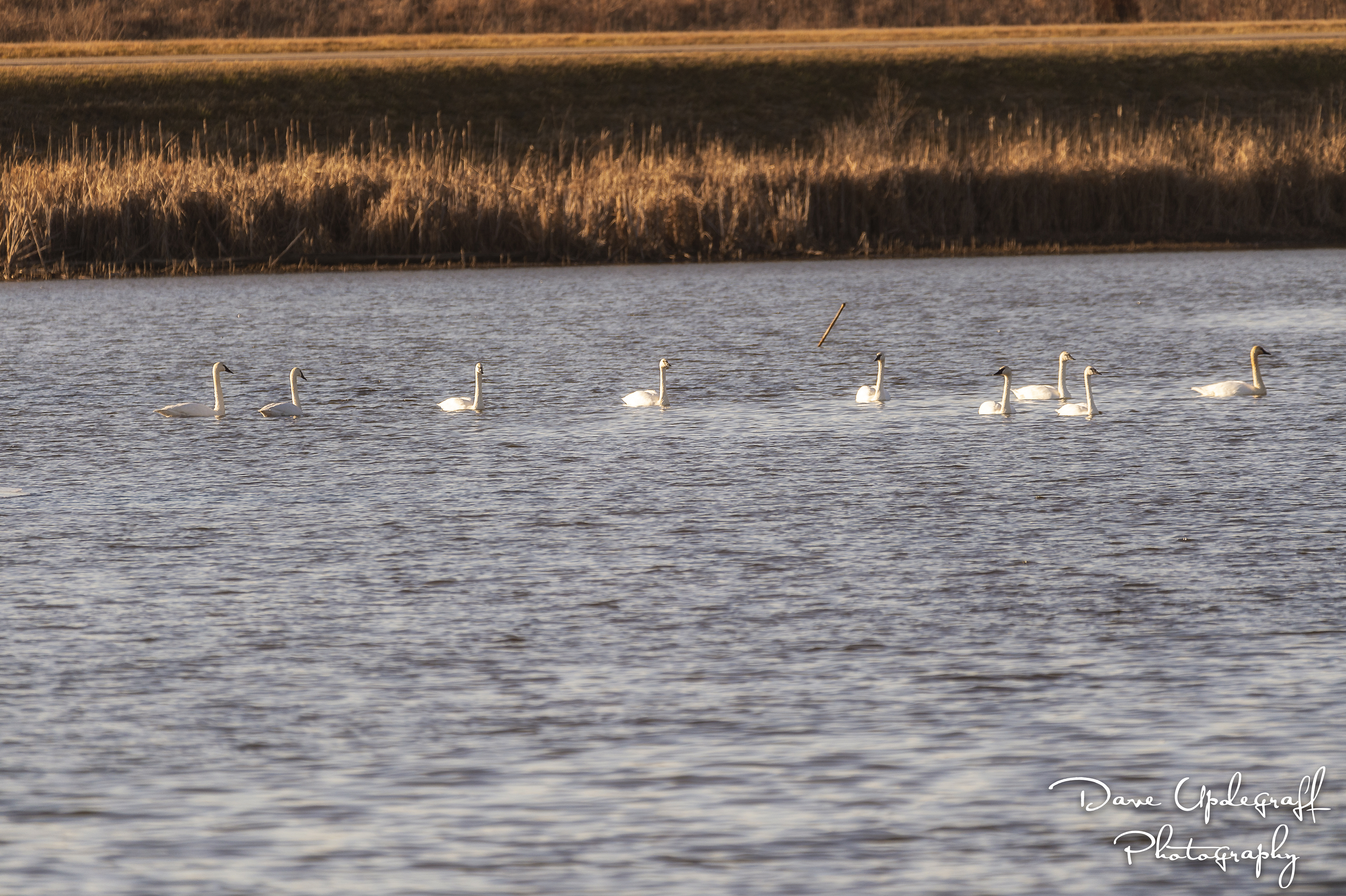 A couple of days ago a good friend of mine asked if I had any long lenses I would like to sell.  After asking a couple of questions I found out that they had an eagle spending a lot of time in a tree near their home and she wanted to Photograph it.

I gave her my recommendation and so she purchased the lens and then wanted to meet yesterday at the Hurstville Interpretive Center.  Jeanne and I drove down to the Center and met with her and her husband (who is a dear friend of mine.) The lens is complicated and somewhat overwhelming to a new user.  So we all drove over to the “Duck Pond” and as luck would have it there were 9 Trumpeter Swans in the water.  They were pretty far away as you can see in the above image, however it was good practice for her to get to know and get comfortable with her new lens.

As we visited and took several images of the swans I decided to put my camera and lens back in the truck.  I kept noticing that the swans were getting closer the longer we were there.  So I went back to the truck and got my camera and once again started taking some images. 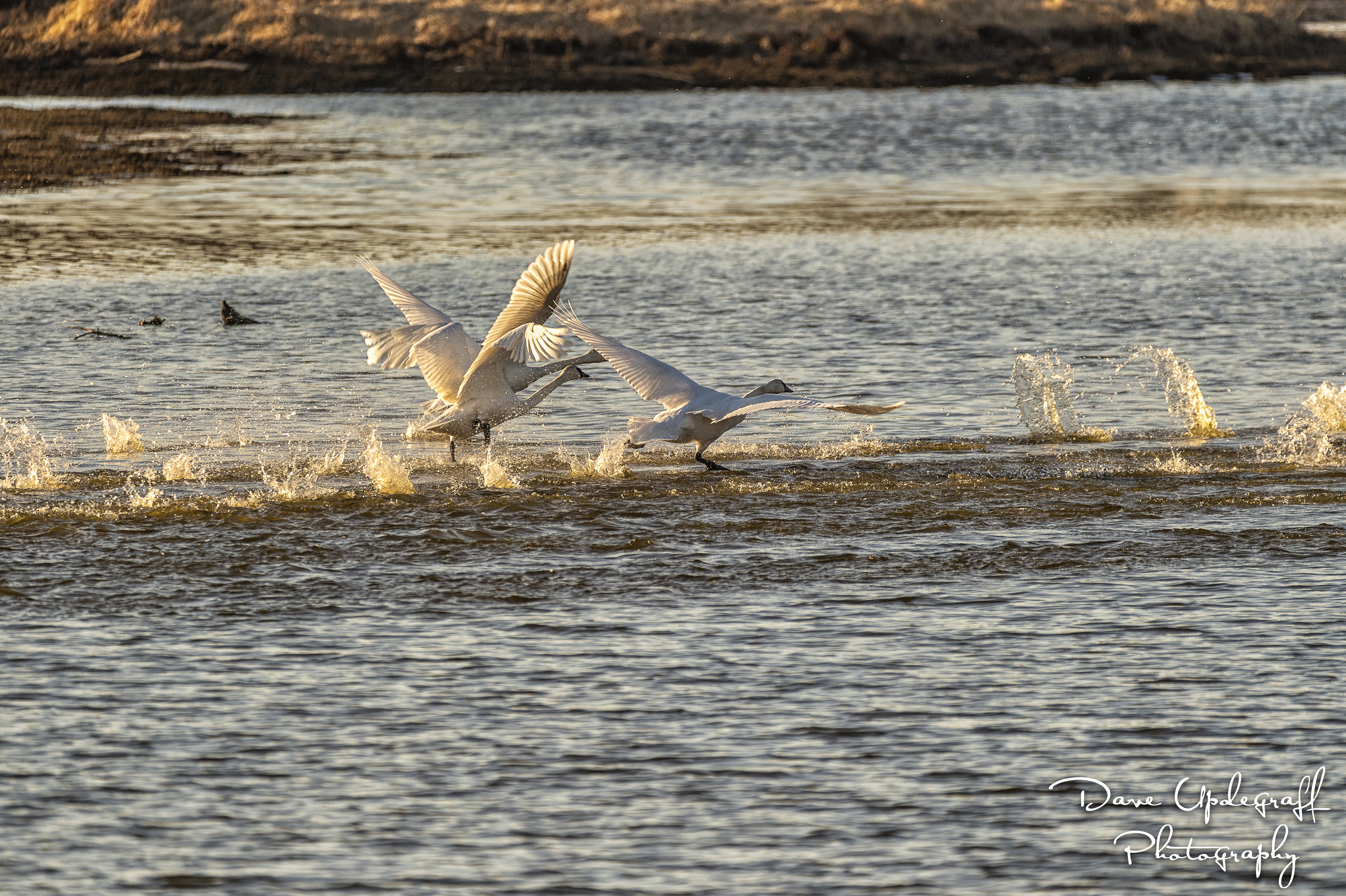 Then as if they had decided among themselves it was time to leave they started taking off in unison.  I was so glad I had my camera ready for their departure.  You can click on any of the images to make a larger version of the image which contains much more detail.

I had my 600 mm lens on the Nikon D4S, which has an incredibly fast frame rate so in a sort span of a few seconds I had close to a hundred images on my card.

And then they were gone.  We said our farewells to our friends and decided to see if we could relocate the swans but they were no where to be found.  It was a fun afternoon and I hope my friend gets as much enjoyment out of her new long lens as I have with mine.

Today I am headed out to the wild life preserve at Green Island.  A photographer I know posted some great images from last weekend so I think I’ll see if I can find something interesting.

Be safe, enjoy your day and be careful.

Out among them again yesterday searching for something to photograph.  This was my best image for the day.  I had a really old barn lined up but there was no way to get to it so I had to shoot through some branches.  Unfortunately when I got home and viewed the images on the big monitor the only thing that was in focus was the branches.

I did find this old barn but it too had a lot of clutter around it and there didn’t appear to be anyone home at the farm so I opted not to go on their property to get a better angle.

So all in all I’m not that happy with yesterday’s shoot.  See what I can find today.