Posted by Dave Updegraff on March 28, 2012
Posted in: Uncategorized. 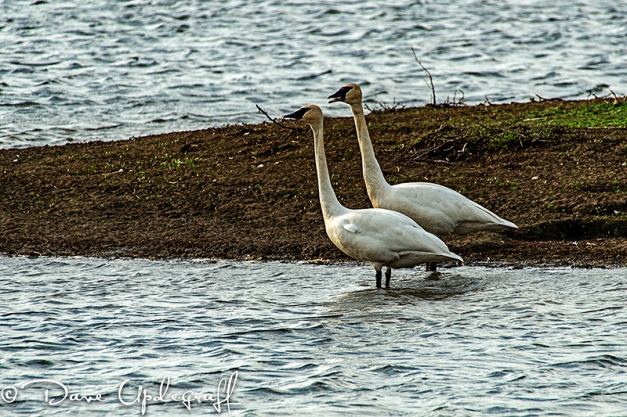 On the way home yesterday evening I was happy to see this pair of Trumpeter Swans at the “Duck Pond.”  I have not seen them around yet this year so I was really happy to see that they had apparently wintered well and were once again back in Hurstville.

I have no idea how hard the wind was blowing but you can see some pretty good waves in the image above.  I found it very difficult to stay steady while trying to capture these images.  I opted not to use a tripod because I am stupid.  The Sigma lens is difficult to hand hold on a good day because it is so heavy and long, let alone when the wind is blowing as hard as it was yesterday.

What we have here is a Mexican standoff.  The swans (who traditionally rule the pond) found themselves up against an irate pair of Canadian geese who had already staked out this little island mound of dirt as their nesting place.  There was a 25 minute posturing and honking event but eventually the swans swam away leaving the geese to their nesting island.

At the far end of the pond I saw this lone juvenile swan.  He showed up at the pond about three weeks ago and pretty much stays at the South end of the pond.  He has no mate and doesn’t seem to mind that fact.

He paid no attention to the other two swans at least while I was there.  I don’t know where this swan came from.  He was there in the Fall last year and like I said came back about 3 weeks ago.  I really love to stop at the Duck Pond and watch the wildlife.  There haven’t been as many migrating birds this year as I remember from past years.

Enjoy your Wednesday.  Thanks for stopping by and be careful.