Posted by Dave Updegraff on April 22, 2013
Posted in: Uncategorized. 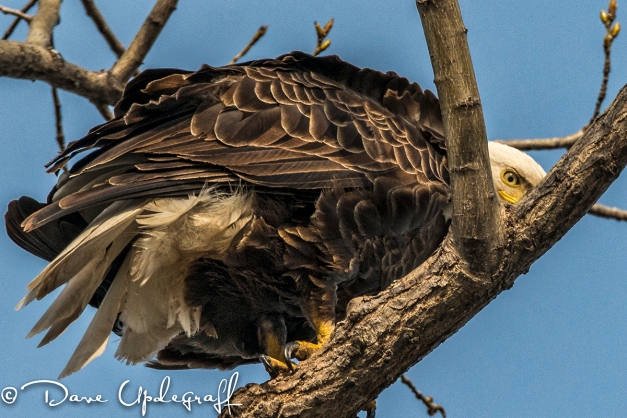 Talk about the evil eye.  When I tried to approach this sitting bald eagle all I could see was his butt feathers.  I kept moving closer as slowly as I could and all of a sudden he looked through this opening and I was nailed.  I expected him to fly but he would go back to looking out towards the river and just occasionally look at me all the while looking like he would launch into the air at any second.  I couldn’t get a head on shot as I would have had to wade in the water and I’m just not that dedicated at 50 degrees.  🙂

My friend Andreas had told me about the wildlife around the Mud Lake area so Jeanne and I drove up there Sunday afternoon.  It’s a twisting, hilly road that is barely wide enough for two vehicles.  They have a small park that is at the river’s edge and we saw pelicans,  great egrets, blue herons, and lots of coots.    Most of the time they were all too far away to try to capture an image of them.  The pelicans were in the main river much to far away to reach with my lens.    All images were shot with: Nikon D800 | Nikon AF-S 80 – 400 f4.5-5.6 G ED VR Lens | ISO 400 1/1250 sec @f9

This is not a very good shot of the great egret but it is interesting.  If you’ve been outside much you’ve run across the nasty red-winged black bird.  They are fearless and will attack anything that intrudes on their self-proclaimed territory.  This egret is 30 times as big as the (RWBB) but after about 45 seconds of the (RWBB) buzzing his head he gave up and flew off.  When I was riding my bike, there was more than one occasion that these little bas#$%ds would actually hit my helmet trying to chase me off.  I have been very lucky not to have wrecked my bike because of them. 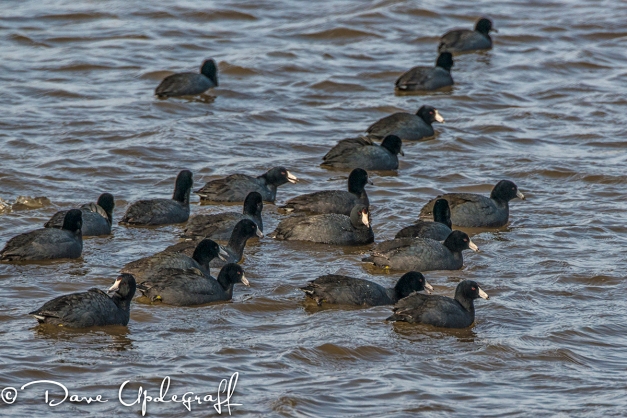 Finally I’ll finish up with these little coots.  They always seem to gather together in large groups.  When we first saw them they were out in a channel and then later when we went back they were on land.  Even though we approached slowly they scurried off to the safety of the water and out of any perceived danger.

We  gave up around 6:45 p.m. as it was getting really cloudy and the light was no good.  We drove up to Balltown and had a nice dinner and conversation at Breitbach’s Restaurant.   This was our first time in their third restaurant.  So now we’ve been in all three of them.  I sure hope this one doesn’t go up in flames.

Thanks for stopping by.  Enjoy your Monday and be careful.  Looks like we may actually start to warm up a little towards the end of this week.