Happy Monday!  I’m off one more day so with all my projects completed and the temperature so cold I may spend the day processing some photo shoots that I’ve done earlier and people are waiting on.

Yesterday Jeanne and I decided to drive up to Guttenburg to see if we could find some eagles to capture.  Guttenburg has a nice area along the river by the lock and dam and it does afford some good shooting opportunities.  On the way we decided to take some of the less traveled roads since we were in no particular hurry to get anywhere.  I’m glad we did because if we had taken the most direct route we would have missed this guy. 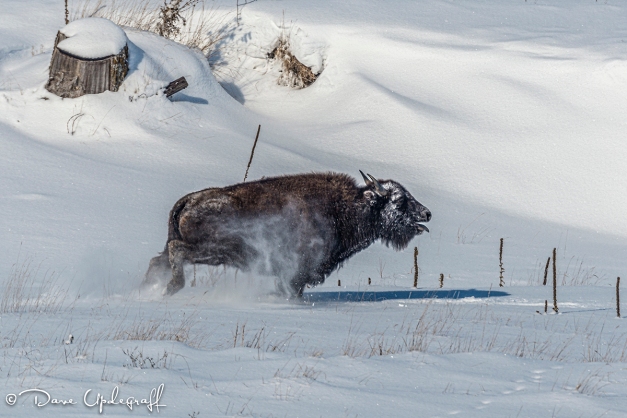 On the other side of the road was this bull.  He was either on something or love was in the air because he would run from one end of his pasture to the other at full speed.  There were other buffalo (I’m assuming females) in an area next to his but they were separated by a fence.  😦

So all he could do was run around and try to impress others.  All to no avail however because he was mostly isolated from everyone else.

We arrived at Guttenburg and was dismayed to find not one eagle in the area.  None flying and not one in the trees surrounding the lock and dam.  The river was frozen solid and except for a narrow strip of open water just below the dam there was no water to be seen.  That narrow strip was surround by ice fishermen so there is no wonder why the eagles were not present.

We had an okay lunch at the Subway in Guttenburg and then decided to head back to Dubuque and check out the lock and dam there.  Same story.  Very little open water and it was inundated with ice fishermen.  We then traveled over to the 16th Street Basin and found some interesting subjects to photography.  More on that in another post.

I guess the best place to capture images of eagles is in Le Claire at lock and dam 14.  My friend Burt has sent some magnificent shots of eagles fishing.  I doubt that I will go there today but you never know.

Thanks for all the birthday greetings on FB.  I do not use FB very much other than I send this blog to it.  So I’m not sure how to respond to all the wonderful birthday wishes other than to say, “Thank You All.”  🙂

That’s it for today.  Enjoy your Monday.  Thanks for stopping by and be careful.