What a great day yesterday was.  I was scheduled to do training for the bulk of the day but late Tuesday afternoon that got rescheduled.  Since I had already blocked off the entire day for training I decided I might as well take the day off and tackle the Phantom wiring job.  Not that I couldn’t have found something to do at work but this wiring thing has bugged me for a couple of days and I really didn’t know when I was going to be able to find the time to try it again.  It’s just too difficult of a project to start at 8:00 p.m. after work.

So as the image above shows it was a complicated process.  I decided that I would rip everything that I had done before out and start from scratch.  It started by watching the videos again. Then I found a video that gave me a key piece of information. DJI industries color code their wires different then we do.  Their ground wire is always brown and their hot wire is either yellow (most of the time) or sometimes orange.  That made a big difference in how I approached the wiring project.

I also decided that I was going to disassemble the Phantom.  I was going to take the top off and doing the wiring on the inside to get rid of all that extra cable.  I have taken a video class on soldering and I felt I had a good knowledge of what to do and how to do it.  So one hour later I have all the screws out except one that just won’t come out and one that has been completely stripped.  😦

By this point I’m pretty frustrated.  I did some research on how to get a stripped screw out and then went to Lowe’s and got the tools I needed and a bunch of stuff I didn’t need.  Back home I finally got the two remaining screws out and disconnected the GPS system, cut wiring harnesses and began the process of tinning the wires, soldering, connecting, and bundling again.  After a couple of hours and retracing my steps I was ready to put the top back on and button it up. 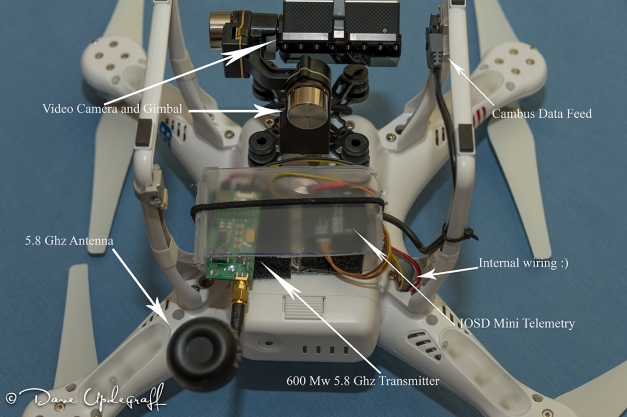 It’s actually a pretty neat package.  I never have to worry about a battery for the transmitter as it is now powered by the Phantom’s power supply.  The video from camera runs through the Zenmuse Gimbal (which also runs off the Phantom’s power supply) and that is then fed to the transmitter and it sends a signal to the FPV device (which in my case are the FatShark Goggles.)  Additionally the IOSD Mini reads flight data from the Cambus and sends it through the video feed to the transmitter and is applied over the view you get with the goggles.

I got it all put back together and then decide to put some new decals on that I had ordered from the same company that sold the immersion transmitter. 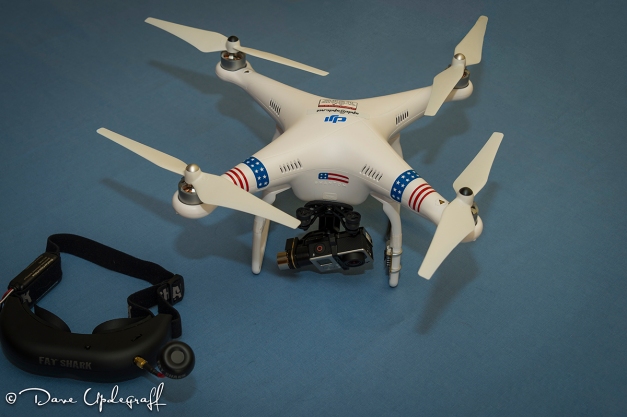 So now my Phantom looks pretty patriotic which will be nice around the 4th of July. 🙂

Now for the big moment.  It’s sitting there all nice and retouched and I know the wiring is correct so it should work unless I fried the goggles or the transmitter.  I powered it up and turned on the goggles and nothing but gray screen.    But a few clicks on the channel selector and I started getting fuzz and a few more clicks there it was in glorious color with all the flight data you could ever hope to have and then some.   Only one problem!  All the data is metric.  Meters and kilometers and a bunch of other things I don’t recognize.  Well it shouldn’t be a problem.  I’m sure there is an easy way to convert to feet and mph.  Nope!  The website rather arrogantly states that the rest of the world is on the metric system so there is no need to make a conversion fix available.

So it looks like I’m going to have to learn the metric system after all. 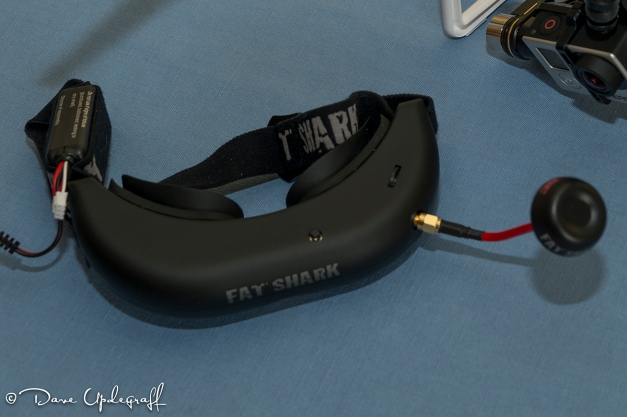 Here are the FPV FatShark goggles with the antenna set to the same frequency as the transmitter on the Phantom.  It’s pretty cool and a lot easier to fly with these than with a small iPhone screen.  🙂

At one point (I think it was when I stripped the screw) I asked myself what would make this a great day?  The answer was to get the wiring all done, the thing put back together and have it work and then take it for a quick flight before the rain came.  And that is what happened.  There is a video below of a quick flight this afternoon to test everything out and then a merge to a night video I shot on Sunday evening around 9:00 p.m.  I hope you enjoy it.

Oh by the way, the video is about 5 minutes long instead of the 7:20 it shows.  I made a mistake so it runs empty screen at the end for two minutes.  I’ll fix that when I have some time.