You may remember that yesterday I was telling you about the territorial dispute at the duck pond, which occurred on Tuesday of this week.  I was very disappointed that I missed some great shots of the dispute and the aftermath of the skirmish.    So I was still feeling bad that I missed that opportunity.  Then when I drove past the duck pond yesterday morning I saw there were four swans in the water and as I got even with them the resident pair took off in a confrontation with the new comers and I just about had a wreck watching the aerial skirmish in my rear view mirror. Damn another photo opportunity missed.

I had a lunch meeting yesterday so I couldn’t go by the pond until on my way home last evening.  I didn’t give much hope for any images because it was drizzling rain and there were dark gray clouds hanging over the land.  As I approached the pond it looked like there were the ubiquitous geese and coots everywhere but no swans.  I thought I might as well head North and try again tomorrow. 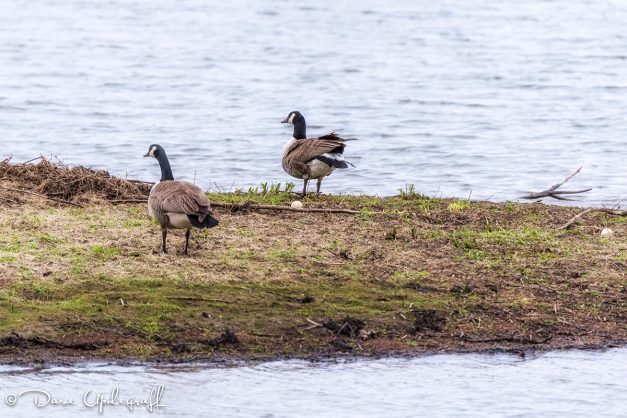 But instead of heading North I decided to take a few minutes extra, so I crossed the highway and saw the swans were in the middle of the marsh land on the West side of the highway.  I did a bat turn and pulled off onto the shoulder trying to sneak up on the swans.  What I didn’t realize was that during the time I was making the u-turn and watching out for traffic they took off and flew back over the highway to the duck pond.   So when I couldn’t find them I made another u-turn and headed North to home.  Then I saw them in the water at the duck pond, so yet another u-turn (it’s not easy being me) and back to the original island where the first skirmish took place on Tuesday. 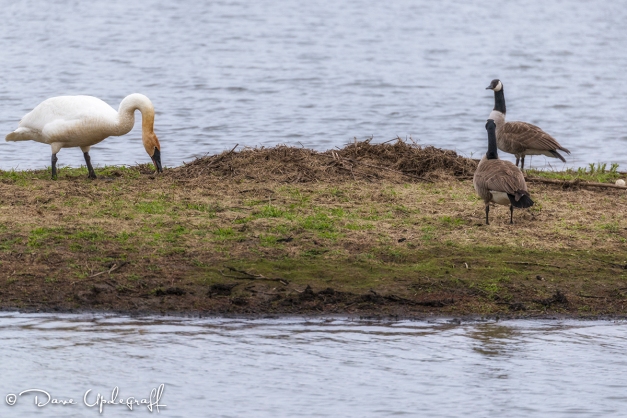 You can see from these images that the swans once again asserted themselves over the geese and tore up the  nest of the geese again in favor of their own design.

It is easy to assign human traits to the geese and swans but I was reading a piece on eagles this morning and it talked about how we humans like to interpret wildlife behavior through our frame of reference and project human inclinations and behavior on their actions.  But as in the case of the eagle it is simply all about hormonal secretions at various stages of life’s cycle that cause body changes and behavioral changes such as the nesting instinct and mating instinct.  Later when the young have grown and can fend for themselves the warm family bond that we admire is no longer present because of changes in the hormonal secretions.

I got to thinking that this may be why the mother goose makes no effort to retrieve her eggs that are in plain sight and why instead she just returned to an empty nest as if nothing had happened.  If you look at like that, then it kind of makes sense.  Anyway it is hard for me to look favorably on the swans now and to accept (as my Friend Ann says, let nature take its course) that those eggs will never hatch.  In reality the swans are just being swans.

That’s it for today.  Hope you enjoy your Friday.  Thanks as always for stopping by and thanks Denise for your kind words.  Be careful.