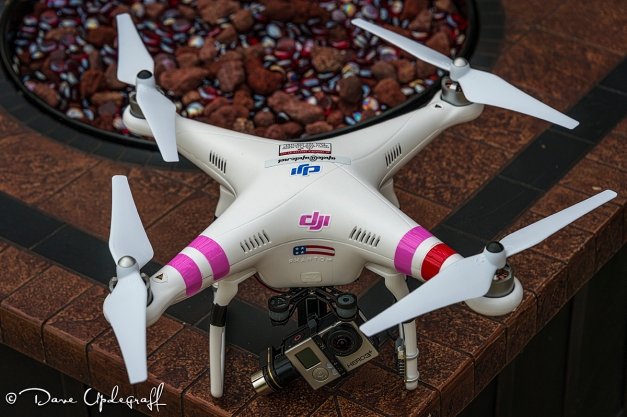 Good day.  As promised this is the story about the Rise of The Phoenix.  Yes it is about the rebuilding of my damaged Phantom so if that is of no interest to you feel free to click the back button.  If you stick around you should enjoy the story.

This is the Phantom 2, which is the second generation Phantom without the built-in camera.  I have to supply the camera, which in this case is a GoPro Hero 3+ Black edition.  I purchased it with a Zenmuse 2 axis gimbal and I have had a lot of great moments of flight with it.

About a month ago the Phantom, while coming in for a landing, decided for whatever reason to take off on its own and it crashed into a sidewalk several blocks away.  Put a nasty scar on the camera, destroyed the video transmitter, and broke some props but no other visible damage.  Jeanne and I scoured the neighborhood for almost an hour before finally finding it.   I re-calibrated the compass, put a spare transmitter on it, and it seemed good to go.

That was the first crash. 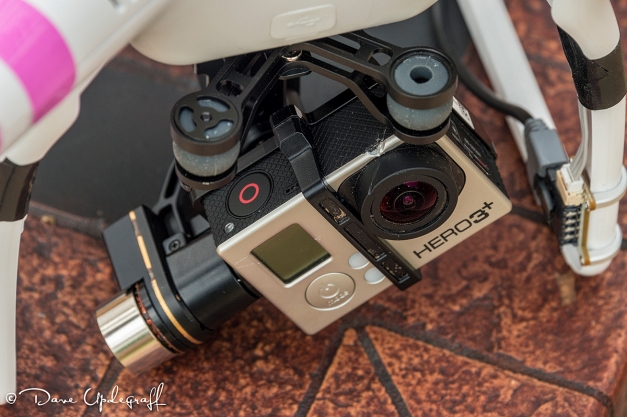 The second crash was a monumental brain cramp on my part trying to please people I tried to fly it out of the Maquoketa Caves from floor level.  I posted the story and the video of the major crash if you’re interested you can click here to see the video.

It hit a rock wall and fell 35 feet into 10 feet of water while all the electronics were still hot.  It spent about 10 – 15 minutes in the water upside down until a couple of really nice kids got it out.  The damage included broken props, destroyed ($150) battery, bent landing gear, a destroyed Zenmuse 3 axis gimbal, and a lot of electronic damage I didn’t realize.

So I bought about $20 worth of rice and buried all the components in the rice and left them there for 4 days.  Spent another couple of hours getting all the rice that had affixed itself to the parts that were wet cleaned off and meticulously checked everything that I could.

I put it back together and turned it on (without the props attached.)  Unbelievably it actually went through its start-up routine.   The flashing lights indicated that it was properly set up and ready to fly.  I started the motors up and they sounded a little funny but they ran.  I hooked it up to the computer and looked at the data and all seemed good.   So I put the props on, re-calibrated the compass, and got it ready for a test flight.  The video below is only 08 seconds, but it tells the story.

That was the third crash.  It flew into me and cut up my left thumb pretty good.  The damage included broken props (are you seeing a pattern here), bent Zenmuse 2 axis gimbal and a broken landing strut.  So now it was obvious that even though it checked out on the computer the lack of control was due to one or more damaged motors that were not operating at the level they were designed to operate at.

So over the last few weeks as time permitted I gutted the Phantom.  I installed 4 new motors (not an easy feat for me.)  Put a new compass on it, replaced the landing struts, rewired and repaired the 2 axis Zenmuse (the 3 axis Zenmuse is toast) put it all back together and it flew late yesterday afternoon.  It is still is a bit unruly in the air but I think that is due to that fact that I didn’t calibrate my controller.  I did that after the flight. 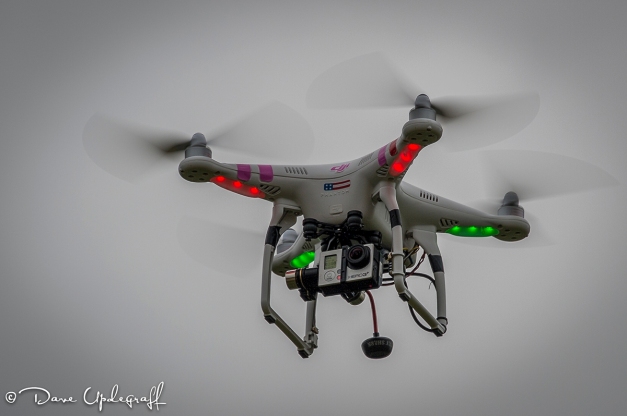 The Phoenix has risen.  By all rights, after what it has been through, its pieces should be in a box in the garage.  🙂

In all honesty I probably would have been better off to buy a whole new system (as they are reduced in price now.)  But it flies and the camera still works and the gimbal still works.  I hate it that the 3 axis gimbal is beyond repair (it was expensive) but that was my fault.  I could have and should have said no.

So below is a short video (3 min : 49 sec)  of the flight of the Phoenix yesterday afternoon.  It’s very short and nothing exciting happens.  You will see a lot of movement in the video and that should not be happening.  My next part that might fix that is the GPS system and I really don’t want to buy that and then have to install it.

Health update.  I went to the Ophthalmology department of Medical Associates today.  I just love that clinic.  There are so many wonderful professionals there and all the information from my personal doctor was transmitted to my eye doctor and then he will send that back to my doctor.   They just do wonderful work there and we’ve been with them for over 30 years.

Anyway my eyes have changed (a lot) so new prescription should help that and there is a small cataract just beginning in my right eye (which is the cause of the fogginess.)  He felt that would self correct once I got my blood levels in-line.  So I was very relieved and thankful that my prayers were answered.

I discovered a new thing about this disease which really hit me yesterday morning.  It’s called the Dawn Phenomena and it is replete with a variety of uncomfortable issues.  I worked through them and by the afternoon I was fine.  I go back to work in a couple of days so it will be interesting to see how I get along.  I am so thankful I’ve had this time to adjust to the medication.

That’s it for today.  Sorry to be so long-winded but had a lot on my mind and I wanted to get it off.  Now I feel lighter.  🙂

Thanks for stopping by the blog.  Enjoy your mid-week hump day and be careful.