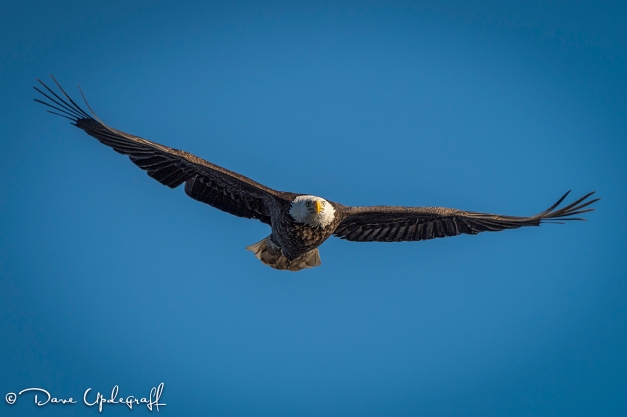 Through no fault of my own, nor from any elaborate planning I just happened to be sitting where the eagles tend to fly over to get to what the photographers call the “eating trees.”  I shot about 54 images of this eagle from far away (the D4 has a huge buffer) and as he got closer and closer I was concerned about losing him because I was trying to shoot from a tripod.  This was my last shot as he flew over the top of me.  🙂

The eagle flights were few and far between.  They seemed content to sit in the “eagle trees” across from the lock and just rest.  Occasionally one or two would take off, skim over the water, and I actually saw a couple catch or attempt to catch some fish.  There were, however, no shortage of gulls flying and fishing, so between the eagle flights and to just to help get better at my panning and timing I would shoot the gulls.  I had almost as many gull images as I do eagle images.  The gull images have already been deleted though.  🙂 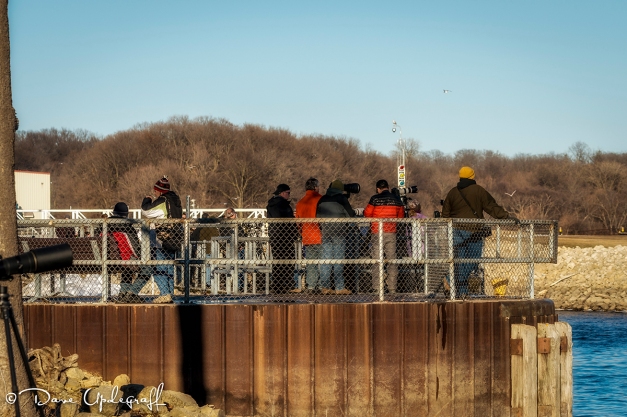 This image doesn’t really do justice to the number of people on the observation deck.  It was shoulder to shoulder and then there were another 20 or more along the banks of the river and on the rocks (where I was.)  Then in the parking lot there were a number of photographers taking images of the eagles in the “eating trees.”  Quite the sight.

If you live in the area and are looking for something to do it would be worth your while to stop by the lock and dam.  It’s easy to get to and as Burt says, “it’s a real treasure.”  I don’t know which is more fun watching the birds or the photographers. 🙂

Speaking of Burt, here is the link to one of his websites.  If you want to see some amazing eagle and other wildlife images it’s worth a visit.

That’s it for today.  Tomorrow more eagle images.  Thanks for stopping by the blog.  Enjoy your day and be careful.