Normally I do not post on Saturday, however since there has been a drought of images of late I thought I would do a little babbling this morning.  Thanks to my good friend Barb who suggested I look for other things and from different perspectives.  Great advice.

Yesterday my normal Friday noon meeting got canceled so I was able to take my camera and travel.  My car was already dirty so I decided to take some gravel roads that I had never driven before and it was a good choice.  Even though it was high noon I was pleased with some of the images I captured. 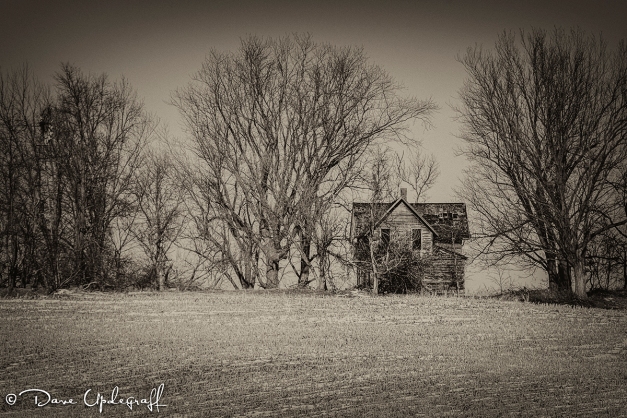 I had the 80 – 400 mm lens with me yesterday and I could have gotten much closer to this house but as I played with the differences in focal lengths I liked this image better than a close up photo.  It had to be in black and white.  I’m sure this old farm-house could tell some stories.  I love to shoot old decaying structures and wonder what they were like in their creation.

This old combine sitting in a field of harvested corn covered with snow really appealed to me.  There were other angles I wanted to explore but this was sitting across the road from a farm-house and they had a couple of angry dogs.  They were also large and untethered so I reasoned I should grab what I could and run.  🙂

So a mixed bag for you today.  It was fun seeing some new territory that I had not explored before.  Perhaps I’ll take some more gravel roads soon.

Thanks for stopping by today.  Sounds like a nice weekend temperature wise.

I took the plunge this morning and ordered a new Phantom.  I gave up trying to get the other one to fly again.  Hopefully I got all my crashing done with the first one and the new one will suffer less.  Can’t wait to get it as I still have a lot of ideas that never got tried out with the last one.

Enjoy your day.  Be careful.