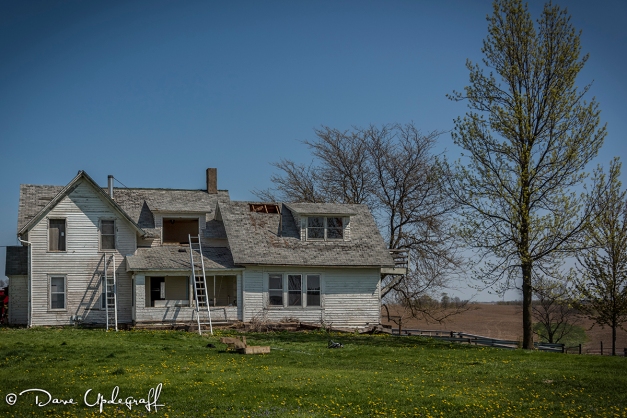 I had one of the most enjoyable days in recent memory yesterday.  Mark Beck, long time Fire Chief of the Maquoketa Fire Department graciously invited me to attend and photograph a training session and house burn at a location close to Maquoketa.

I had asked Mark sometime ago if it would be possible the next time they had a house burn / training session if I could attend and he remembered my request.  I took two cameras and two Phantoms with me and shot lots of photos and video of the day.

Mark’s oldest son Brandon, who is an investigator with the Jackson County Sheriff’s Department also brought his Phantom Vision 2+ and did some up close and personal video of the fire.  He’s a much better pilot than I am so he got some amazing close up video of the burn. 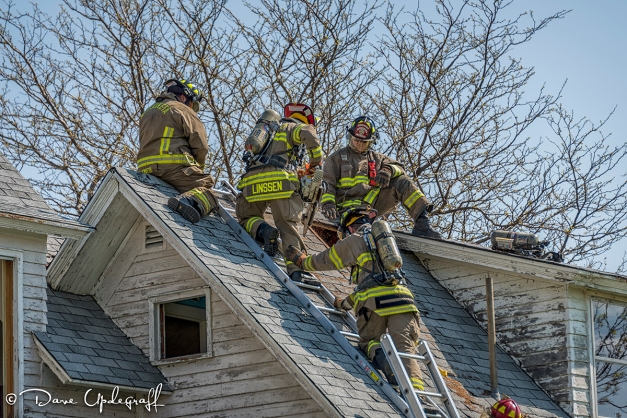 The temperature was about 78 degrees with an 18 – 20 mph wind.  The firemen started their day at 7:00 a.m. with safety training and a planning session.  Figure the heat of the day plus having to wear full bunker gear and be physically active and those guys had to be exhausted by the end of the day.   I arrived a little after 10:00 a.m. and the training was in full engagement.

The above photo shows firemen training on roof ventilation.  It is an important part of the overall fire fighting strategy.  There were firemen from several of the surrounding communities so it allowed all the community fire fighters the opportunity to practice their skills and learn new techniques.

Firemen practice with a life-size dummy the technique of rescuing a person from a 2nd story window and how to properly evacuate them down a ladder.  This is no easy task.

In another life I was a Public Safety Officer at Maryville, Missouri.  We were crossed trained in Police and Fire operations.  I have had to climb ladders to upstairs windows with a fully charged fire hose and I can tell you it is a scary proposition.  I never had to extract a person from a window and I don’t even want to think about the possible consequences that might have happened.

This image is a still photo taken from the Vision 2 copter.  It has a 12 megapixel camera which shoots RAW images.  It also takes video but I’ve got a problem with the gimbal on that copter and the video is very shaky.  I’ve got to get that figured out.

I have a lot of video to edit and I will show that as the week unfolds.  Lots more images as well.

I enjoyed getting to know Brandon much better and learned that we are kindred spirits.  We both love technology and gadgets.  We both have understanding wives and there is no such things as needing something, it is about having something.  🙂

Thanks for checking out the blog.  I hope you enjoy your day.  Be careful.