What a great weekend I had from a photography standpoint.  Well, okay the rest was pretty good too.  Saturday Jeanne wanted to go to the 16th Street Basin and see if there were any eagles there.  We waited for the sun to break out of the clouds, which never happened, so around 3:30 p.m. we decided to just go and see what we could find.  There wasn’t much going on when we first arrived and in fact we were ready to leave when some of the eagles started fishing and then it got very interesting.  More on that for another post.

Over the weekend I photographed eagles, blue herons, geese, ducks, canvasbacks, hooded merganser, common merganser, gulls, an owl, a squirrel, and various other small birds.  I made over 2,500 images in the two days.  The 3 images I have for you today were all taken yesterday at the Bee Branch Canal, which is an interesting story in itself.

The sun was out yesterday morning so I decided to see if I could get some better eagle images at the Basin.  I was surprised to see the ice was completely gone, since there was still a fair amount of ice on Saturday.  There were a few eagles in the trees but no action when I arrived.  When I went to my favorite spot I saw two guys standing there with big lens and tripods.  They appeared to be annoyed that I stopped with my car to visit with them.  So not seeing any action and feeling a little hostility I decided to see what else was going on.  I went to the river and found a couple of eagles perched in the trees overlooking the dam but I’ve got thousands of images of eagle images sitting in trees so I moved on. 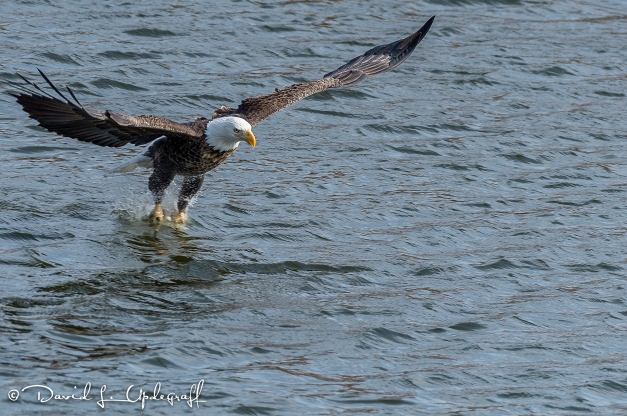 I thought I would try the other side of the Basin thinking I could get some images of eagles flying, but that didn’t offer a very good view and the eagles were too far away.  As I was walking back to my car I noticed a large number of gulls flying around the Bee Branch Canal.  I reasoned there might be some eagles there as they like to let the gulls do the work and then they grab the fish.

I parked the car, grabbed my camera and tripod and walked a few hundred feet through the tall weeds and grass and found 6 eagles perched on a tall mound of dirt.  What happened next was two hours of fun photographing eagles and gulls working in tandem to feed the eagles.  🙂

The gulls would dive in the water and come up with a fish which was usually too large for them to carry.  They would drop the fish (which was stunned) and no more than the fish had hit the water there was an eagle there to grab it and leave with his prize.  I saw this happen 6 times while I was there.  I wasn’t able to catch-all the action but I got some of it.

The Canal offered a lot of shooting challenges.  There are tons of objects for your camera’s auto focus to pick up on and many times I ended up with a brown blob because the focus was on the scenery.  I decided to shoot in crop sensor mode, which accounts for the framing of some of my images.  In the view finder they were centered but camera crops them for a smaller sensor size so I didn’t always have a good composition.

I finally got tired of standing after a couple of hours and there were no eagles fishing anymore so I packed it in and decided to go up to Mud Lake to see what I could find.  More on that in a later post.  Remember you can click on the images to show a larger image.

That’s it for today.  Thanks for stopping by the blog.  Enjoy your day and be careful!