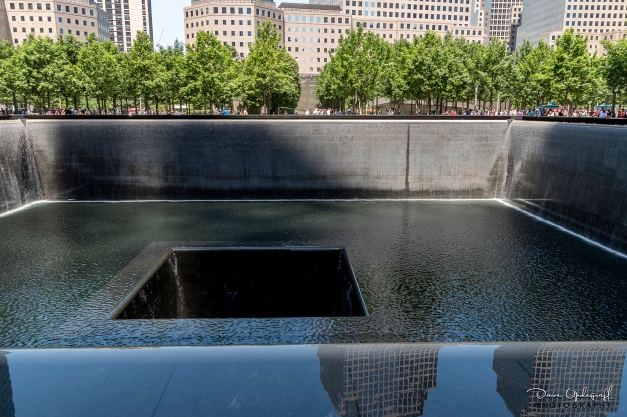 Today is the last post I will do about our New York experience.  I hope you have enjoyed the images and narrative.  There is a lot of untold stories and experiences but frankly I’m tired of working on it and want to move on to other things.

So, today I have 12 images and 3 videos to wrap up the trip. 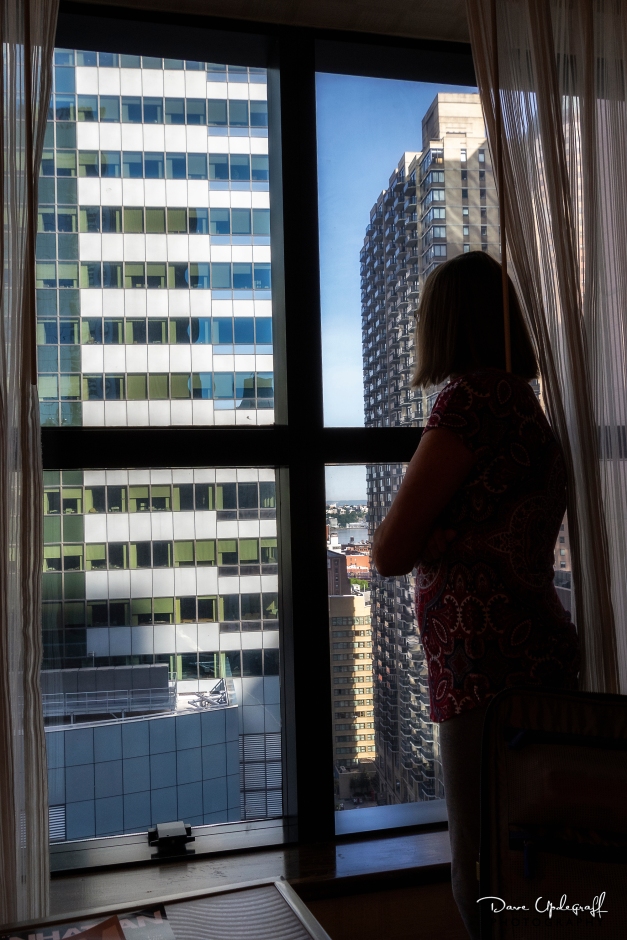 Anytime we were in the hotel room this is where I would find Jeanne.  Either standing by the window or sitting on the window ledge.  She really enjoyed watching the people and traffic no matter what time of day or night. 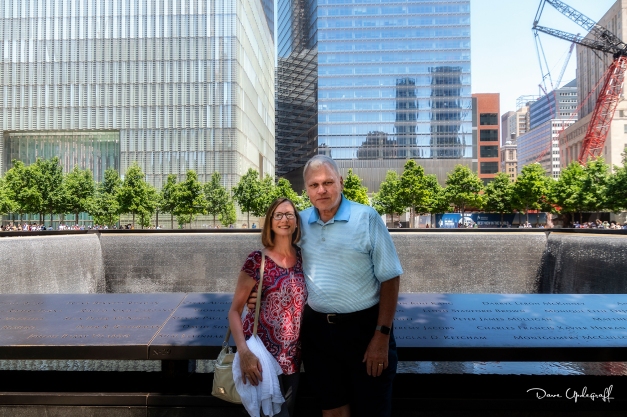 We decided, after some negotiation, that we would spend the morning at Ground Zero.  I was tired of walking all over New York and standing in line. One of the main reasons I went to New York was to be at Ground Zero. 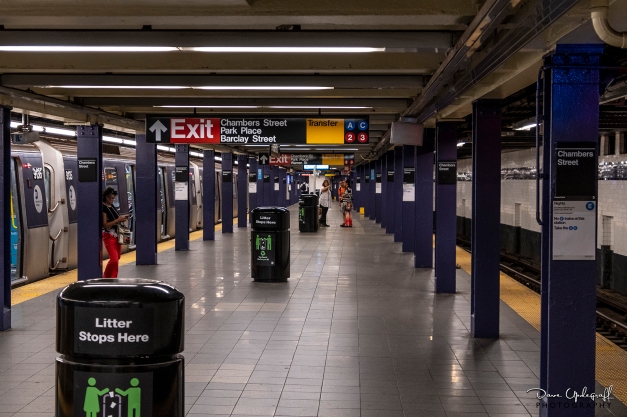 With a new-found confidence I convinced Jeanne to trust my navigation skills and we walked a half block to the subway and took the A train all the way to Ground Zero.  I was so proud of myself!!  I was amazed by the subway.  I had heard so many stories over the years most of them bad.  The subway was clean and we felt safe the entire time.  Only one exception was when because the train was full we had to set next to a very large man who was pretty well wasted and he was singing, shouting, and talking to himself.  As soon as a new area opened up we moved.  🙂 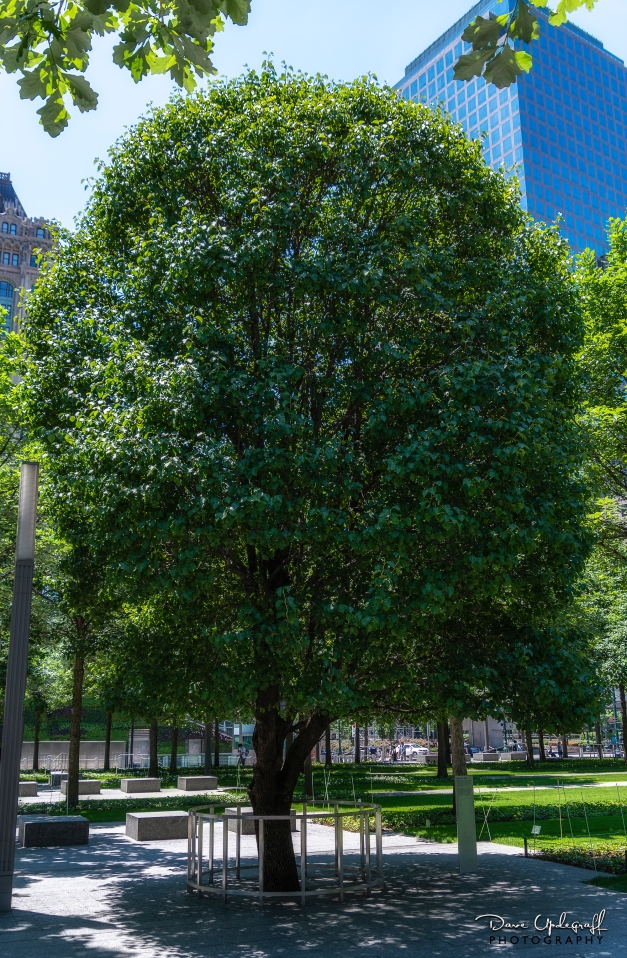 It took me over 30 minutes to get this image of the “Survivor’s Tree.”  There were so many people around it and I kept shooting hoping I could remove people from the scene using a Photoshop technique.  Then as if my wish was granted I had 90 seconds of no one around the tree.  I was so happy to make this image.

I cannot tell you how wonderful the morning was.  I felt at peace and thought about all the video I have seen over the years of the 9-11 tragedy.  For some reason I felt connected.  It’s hard to explain but I have to say that Sunday morning was my favorite thing of the entire trip.  There we lots of other things I enjoyed at well.  We went to “Wicked” on Broadway Friday night and had front row center seats.  It was amazing.  The Freedom Tower was amazing as was some of the 9-11 museum.  The part of the museum Jeanne and I both wanted to see was inundated with so many people that you couldn’t get close to any of the exhibits unless you stood in line and waited for several minutes.

Because of the number of people crowded into a relatively small space it was very uncomfortable and hot.  That is the one thing I would do different if I were to go back.  I’d visit the museum as soon as it opened in the morning. 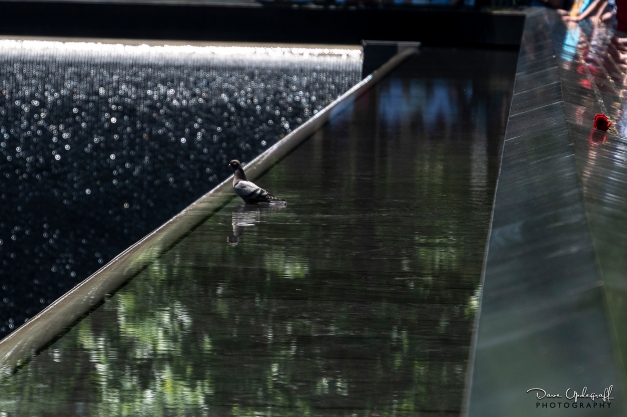 We walked around both towers’ footprints and then sat and reflected.  This pigeon dropped down and grabbed a drink then flew off.

Jeanne wanted to visit the Fireman’s Wall honoring the 343 Firemen who lost their lives on 9-11.  It was too big to get in one picture so I shot 4 images and stitched them together in Photoshop.  This is a technique that works pretty well but I did a really lousy job of taking the images and so there is a lot of distortion in the image.  I would suggest clicking on this image to see a more detailed version. 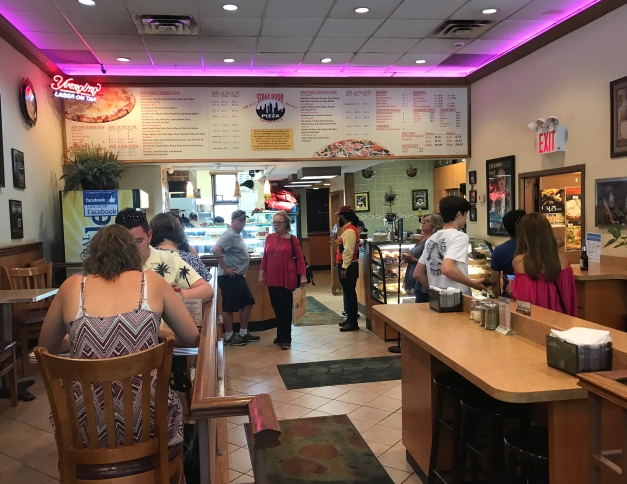 Finally around 1:00 p.m. we decided to go have some New York pizza.  I did some terrible things (food wise) while in New York, including eating the first pizza since I was diagnosed with diabetes over three years ago.  It was so wonderful. 🙂

Bolstered by my new-found confidence in negotiating the subway system, I told Jeanne I could get us back to within one block of our hotel.  She was skeptical but went along.  I got the right train but I failed to take note of the “Express” on the train placard.  Jeanne tried to tell me that she didn’t think this was the right train but I insisted it was.  Well I found out what “Express” means.  It goes fast and it doesn’t stop very often.  We soon found our selves on 136th Street so we got off to get our barings.  Ironically it did stop at our stop but I was waiting for 49th Street, which of course there is no stop on 49 Street.  😦

So, about an hour later and after many questions to other confused travelers we found the right train and arrived at 50th Street exit. 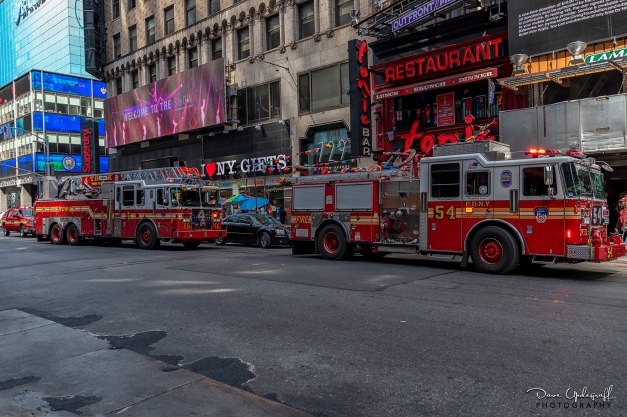 I don’t know what was going on but they had some heavy-duty equipment on hand and a Battalion Chief.  It’s really interesting the way the Fire Department responds to a call.  they have this low growling siren (used to be called a Q2)  It was the loudest motorized siren around when I was in law enforcement.  They never use it at its full capacity but have the loudest air horn I’ve ever heard.  They get your attention.  🙂

We decided to go back to the hotel to rest and refresh and then go out to Times Square after dark.

After dark the “street vendors come out and they spread their wares (purses and handbags) out on traps.  I never saw a woman walk by without looking at the purses and the men had their eyes straight ahead trying to keep walking.

We were having a nice dinner at TGI Friday’s and there were two street vendors right outside our window.  All of sudden they packed up there stuff and moved away in less than 45 seconds.  Watch the video below to see why. 🙂

Did you notice the woman with her cart?  As soon as she saw the mounted police officers was not interested in her she set up again as fast as she had packed up.  The guy standing with his cart did the same thing.

Watch this video below of this artist making an image.  I bought the image for $20 and he gave me another for free.  I do not have them framed yet but intend to.

I was never surprised by the humanity we encountered.  But at night there are some crazes that get out.  Jeanne and I were sitting at outdoor area on Times Square and she said to me, “I wish that lady would stop singing.”  I couldn’t hear her so I asked Jeanne to point her out to me.  You should watch this.  🙂

After a while I notice this guy sitting at one of the tables playing chess with another guy.  He is the guy on the right in the image below. 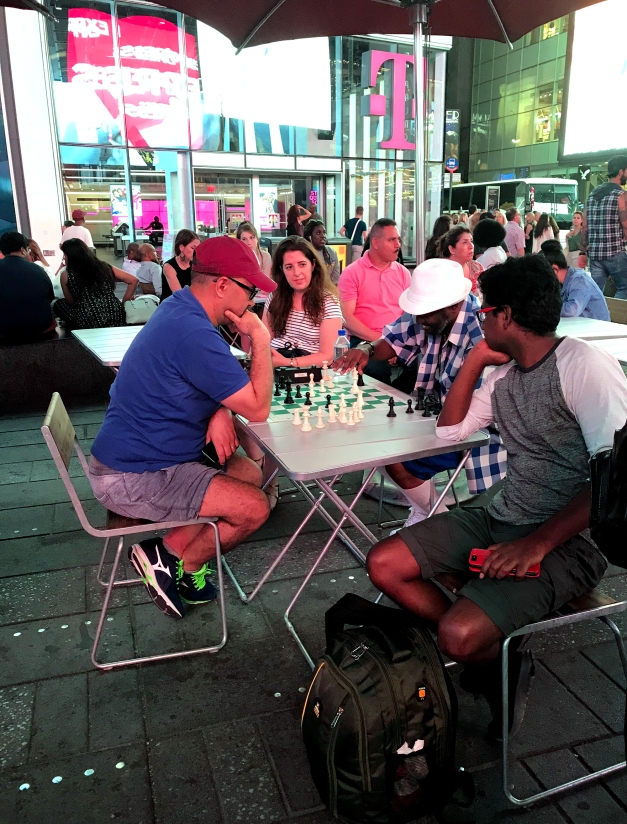 What drew my attention to him was that after every move his opponent made he would go through a very animated series of hand gestures and you could hear him talking to himself.  I couldn’t hear what he was saying but he was talking about the situation of the pieces after the last move.

I watched this game for about 20 minutes and finally the guy on the left knocked over his king (resigned his position), stood up and shook the gentleman’s hand and walked away.  I didn’t hesitate one second but quickly walked over to engage him in conversation.

His deal was that you could play him for $5.00 and if you won the second game was free.  love chess.  I have played since my neighbor taught me the game when I was 12 years old.  I played all though high school, college, and all my life really.  Jeanne brought me two electronic chess boards over the years and I wore them both out.

Now I play every day on my iPhone, iPad or my computer.  I’m not bad but playing against the computer is not as good as playing a live person.  I’ve gotten complacent in my strategy and developed a form of tunnel vision in my play.  It’s good enough to win a high percentage of the games I play but not grow and develop as a chess player.

I am excited that my Grand Son, Josh has become interested in chess.  He will grow to become a worthy opponent.

Turns out this guy is a chess master.  he teaches at the Chess Forum (http:\\www.chessforum.com).

The first few moves I made were pretty good and I was feeling pretty confident with one of my favorite openings.  I was just getting ready to make my “kill shot” when he took one of my key pieces.  I looked up at him and he was smiling.  He said, “You didn’t really think I was going to let you do that did you?”

He pretty well kicked my butt after that.  But he was a gentleman and he explained the flaw in my strategy, which I really appreciated.  It was worth the $5.00 fee to play him.

Back to the hotel well after midnight for a glass of wine and then to bed. 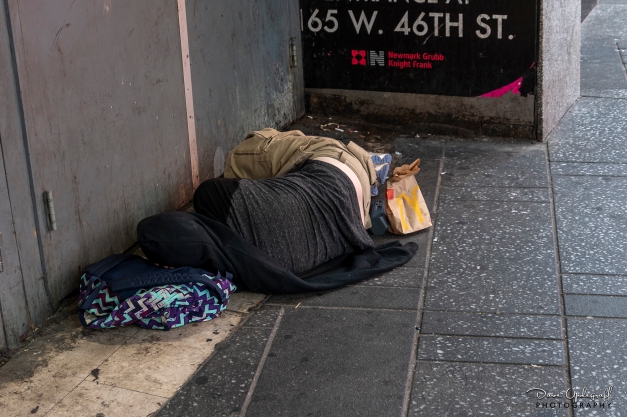 This is the last photograph I took in New York.  There is a lot of suffering that goes on in that city.

Thanks for staying with me while I finished this long post.  I don’t think I would ever want to go back to New York but as I told a friend the other day it was kind of like when I rode RAGBRAI some years ago.  There was never a day that I could say, wow I’m having a great time but the experience was remarkable and will stay with me for the rest of my life.  That’s how I feel about New York.