Okay, yesterday I told you that I may or may not have an adventure to tell you about.  Well I do because it turned out to be a happy ending.  If it hadn’t, I would not be posting this story.  🙂

It’s a long story with a 5 minute video at the bottom of the post.

I have been working on again off again on a video / photography project about the “Duck Pond” at the Hurstville Marsh.  One of the things I wanted was to do a relatively low fly over of the marsh to give the viewer a sense of its size.  Now with my questionable flying skills and flying mainly over water I have been reluctant to do it for sometime.

Saturday I decided that the weather was perfect for flying.  Jeanne was busy with a church thing she was working on, so I loaded up my older Phantom and headed for the Pond.  I had flown the root in my mind many times and knew exactly where I wanted to go and wanted to show.

I was super careful about getting the GPS lock, calibrating the compass, checking battery capacity, and wind speed.  When I was comfortable with everything I launched the Phantom.  It was a good flight (the video below is an abbreviated version) and I got most of the footage I wanted.  I still had more than 50% battery reserve when I made a critical mistake.

I was at the far end of the pond (still well within the range of the flight controller) when I lowered the craft to get a better view of the surroundings.  Apparently I got too low because the group of trees between me and the Phantom interrupted the signal and initiated its fail safe routine so the phantom went into its Going Home Routine.

I really was getting bad reception through my monitor but the last thing I saw was what looked like bare branches.  That’s all I had to go on because immediately after that the monitor went black.  Nothing was showing (the impact knocked the battery out of the phantom) because there was no power.

So what to do.  If I do nothing I lose my Phantom, camera, and a lot of investment.  If I go in there looking for it I run the risk of seeing or worse stepping on a snake.  How bad do I really want to get that damn machine back?

Now most people know that I have an abnormal fear of snakes and the area between where I was standing and the Phantom went down is covered in chin high grass, brambles, thistles, and assorted other bad things including fallen tree limbs.  The grass is so thick in places it actually pulled my shoe off a couple of times.

Did I mention that it was 92 degrees with the humidity of an oven.  I was wearing a tee-shirt, shorts and tennis shoes.  Not exactly the proper apparel for hiking through a jungle invested with all sorts of wild things and probably some poison things as well.

Throwing caution, fear of snakes, common sense, and logic to the wind I went into the wilds of the marsh.  I wasn’t sure what the final path of the Phantom was but I did know that it hit some trees so I concentrated my search around them.  Sounds easy but after an hour and a half of walking, falling down, being trapped and literally hacked to pieces I gave up.

I was drenched, dehydrated (I lost my water bottle) and bleeding.  So dejected and very disappointed I drove home.  Took a long hot shower and put medicine on my legs and arms and had a glass of wine.

Yesterday morning Jeanne and I decided to give it another try.  This time properly dressed in hiking attire complete with gloves and walking sticks we headed back down.  During the prior evening I had thought through the flight and had narrowed down where I thought it should be.

The good news is that after only 15 minutes of walking I found the Phantom.  I found the water bottle too.  🙂

There was very little damage to the craft.  One broken prop and the battery had been knocked out but the camera was in perfect condition and the video finally ran camera’s battery down.  I spent about an hour working on it yesterday afternoon and took it up for a test flight.  It worked perfectly.

So that’s my adventure story.  Yes I’ll admit it was not a smart thing to do going into the marsh dressed as I was but I just didn’t want to lose that Phantom and camera.  In the end I would have been better off coming home and getting the proper clothes for the search but it is what it is.  🙂

That’s it for today.  Thanks for stopping by the blog.  Sorry for the lack of photography and images but you know me, if it’s on my mind I’m going to write about it.

A couple of my friends asked me what happened over the weekend because not only was there no blog on Saturday or Sunday but none yesterday either.  Well as much as I hate to admit it I never touched a camera the entire weekend.  That is with the exception of the Phantom’s camera.

As you may recall one of my laments about the FPV (first person view) set up on the Phantom requires me looking at my iPhone (very small and hard to see in the sunlight) or a 7 inch monitor, which is also somewhat hard to see in bright sunlight.  Enter a product called Fat Shark Goggles, which in essence puts two small TV screens in a pair of goggles and then you can see exactly what your camera is seeing. 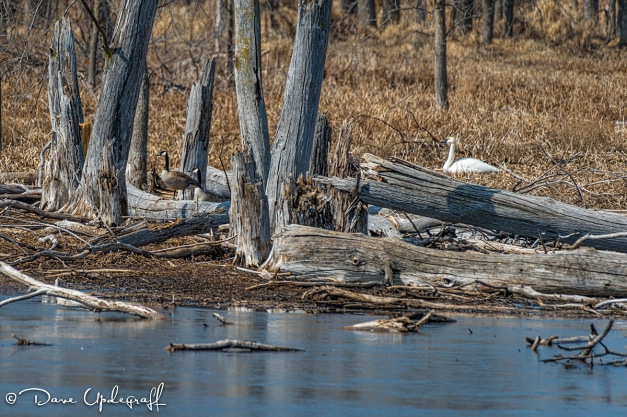 So Saturday I spent most of the day reading material about how to install the transmitter on the Phantom and use the Phantom’s own power supply as opposed to having a secondary battery power supply.  Between reading, watching videos, making diagrams and doing the actual wiring it took me most of Saturday to accomplish.  Mix in there 4 flights to test the equipment and a visit from Angie, Josh and Gabby and that pretty much took up the whole day.

Then Sunday was reserved for a couple of well-earned naps, some more flight tests and finally a night flight around the neighborhood.  So I’ve got probably 15 Gb of video of the Phantom taking off from our back concrete slab, rising to a height of 300 – 500 feet, a couple of 360 degree turns and then a landing.  I don’t think you want to see that over and over again.  So come Monday morning I didn’t have anything worth showing. 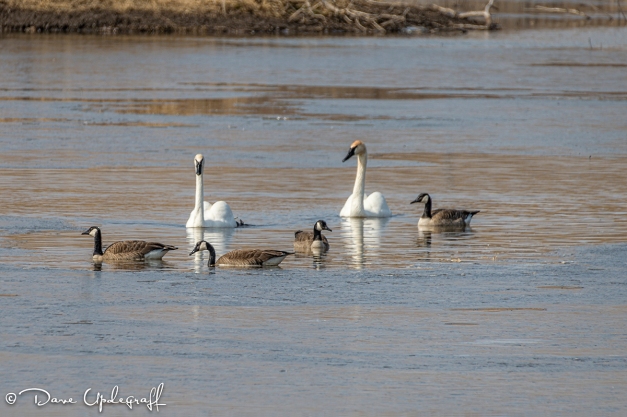 Yesterday on my lunch break I grabbed a bite and then off to the duck pond.  There were not as many birds there yesterday as there has been last week.  Only 3 swans and maybe 30 – 50 geese.  The two geese in the first image were sort of stranded in a small open pool of water surrounded by ice from the morning’s cold temperature.  The second image is of a lone swan (perhaps nesting) I hope.  I am excited to see if we get some more cygnets again this year as I will enjoy photographing their development.

Finally just a pair of swans intermingled with some geese.  Life at the pond was peaceful and relaxed yesterday.  I think most of the territorial disputes have been settled for the time being.

As soon as warm weather arrives I’m going to attempt a fly over of the duck pond.  I think it will make an interesting video.

So that’s it for today.  I hope you enjoy your Tuesday.  Thanks for stopping by and be careful.