Yesterday afternoon was the second Soccer practice / game / snack-time for Gabby.  It was great fun watching these three-year old children, most of whom would have rather been left to their own devices and just play with each other in the grass, try to grasp the concept of kicking and moving the ball towards the goal.

Angie calls it a “glorified snack break.”  It does seem that they really look forward to coming to the sidelines to get a drink and some snacks.  During the practice part of the game they sat the ball on a little disk so the kids could practice kicking it.  I tried to get some images of that but couldn’t really dramatize with a still photo the hilarity of the effort.  🙂

Gabby and her little friend did this a fair amount of the time they were on the field.  I don’t know how effective it was but things are always better when you do them with a friend.

I made an error yesterday that I haven’t done in years.  Some how I inadvertently changed the image quality setting on my camera from RAW to JPEG.  I have not shot in JPEG for years.  So I’m not happy with the results but still cannot figure out how I changed it as I would have had to go into the menu settings and manually changed the quality settings.  That’s not something that is easily done by mistake.

Couldn’t pass up an opportunity to photograph Austin practicing his walking.  He gets pretty excited when he walks, which makes him speed up, which makes him fall down.  It’s a learning process and he’s getting very close.  🙂

That’s it for today.  Several projects around the house today and I hope to get in a bike ride.

Thanks for stopping by the blog.  I enjoy your comments so please feel free to leave one (good or critical.)  Enjoy your day and be careful.

Some random images for you today from yesterday.  I was ready to head out to watch Josh’s last soccer game of the year and notice this beast on the bird bath.  The water had a layer of ice that had formed during the night and he was perplexed as to how he could get a drink.  I think this is a common crow but I’ve never seen one at the bird bath before.

I captured this image using the Nikon D750 with a Nikon 80 – 400 mm lens shooting though the patio door, which hasn’t been cleaned in a couple of weeks.  So all things considered I’m happy with this shot. 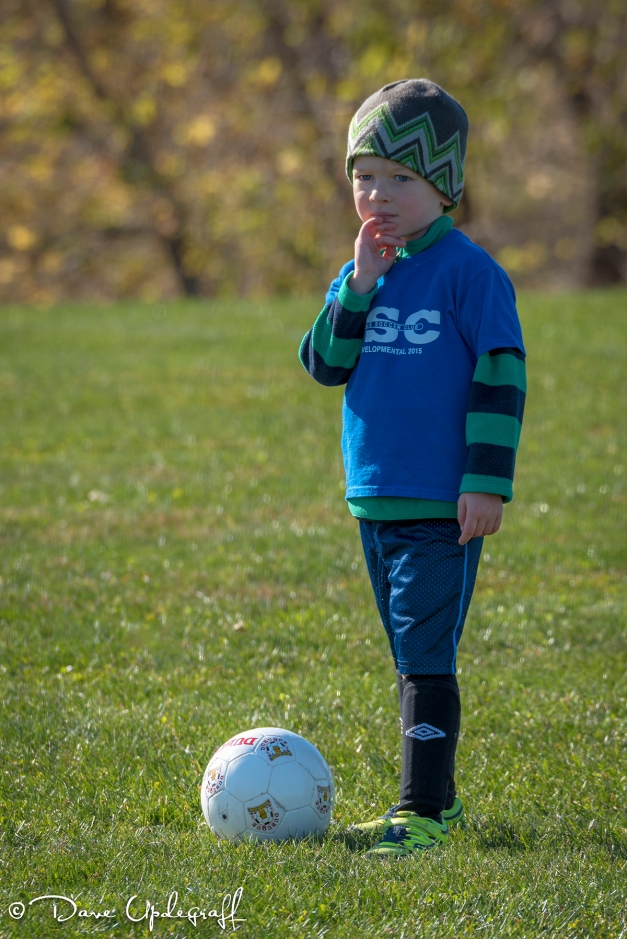 So yesterday was the last soccer game of 2015 for Josh.  It was very cold hovering around 41 degrees with a breeze.  Fun to watch all the parents and grand parents all bundled up and shivering.  The kids didn’t seem to mind the cold as they ran and played.

Give Gabby some raisins and she is happy.  She doesn’t pay much attention to the game but does enjoy being outside.  She was leaning over her chair and fell into my legs.  She wasn’t hurt but scared.  Cried for a long time in my arms (and really had to work at it.)  I finally gave her back to Angie who put her back in the chair with her raisins and she was happy again. 🙂

Not a very good shot of Austin.  I was too close for the lens and he was in the shade so some camera shake made this image a little softer than I like.  But what the heck it’s a picture of my grand child so it will work.

Finally, Angie and Josh head back to their car as Ben had taken Austin and Gabby back to the vehicle to warm up.  Fun time with them all.  Josh is now taking hockey and he really seems to like it.  Only problem is his games are at 5:00 p.m. on Wednesday evenings so it will be very difficult for me to make one.  😦 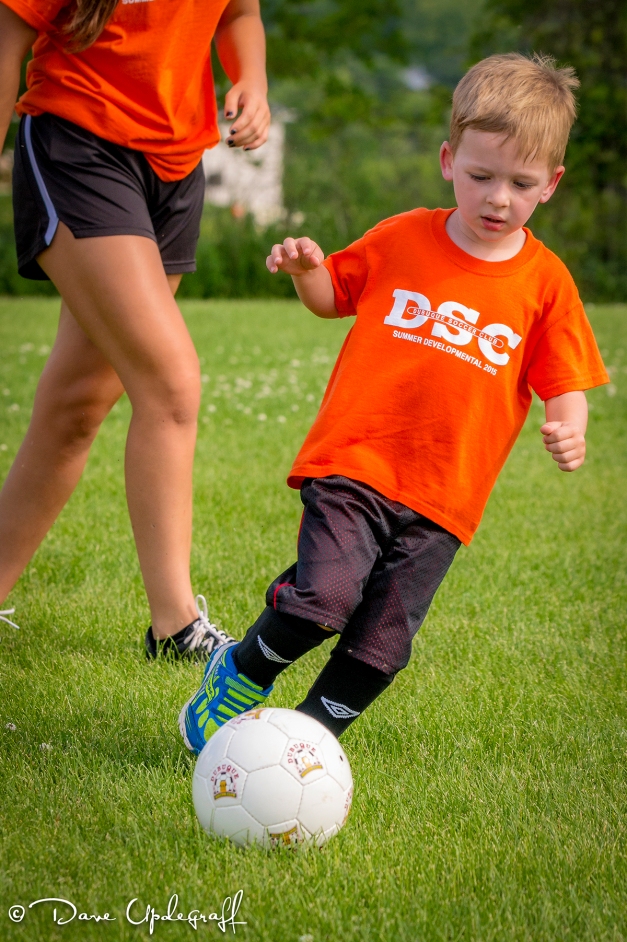 Sorry more images of the Grand Kids today.  We were able to attend Josh’s soccer practice and game yesterday.  It is like anything else in life.  You learn from your experience.

Next time I won’t take the 600 mm lens, it was way too big for the game.  I think the 70 – 200 mm lens would be perfect for this type of activity.  You sit right on the out-of-bounds line so there is no need for a long lens.

Take an umbrella.  The sun was hot and brutal.  The kids were all drenched from the heat and we were too.  I did a 32 mile bike ride yesterday and finished up in time to take a shower and get to the game on time.  What a waste (taking a shower), had to take another one when I got home.  🙂 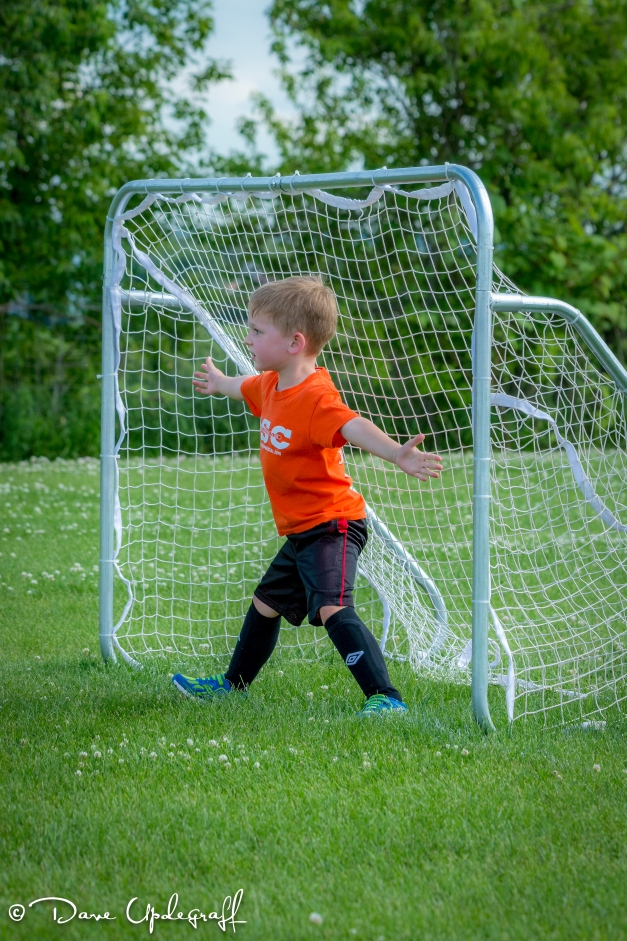 Now about the soccer game.  I remember the first time I went to one of Mark’s T-ball games.  I had missed the first one and so when I got there I saw 20 kids in the infield and a few in the out field.  I told Jeanne, no one will be able to get on base.  She said, just watch.  It was great fun to watch.

At the soccer game they play three on the field.  There was one standout on Josh’s team and he scored 9 of the 10 goals.

This was Josh’s favorite thing to do, run to the goal and defend it.  Not a bad idea when you think about it.  It was great fun watching the little guy play and the social interaction they all had. 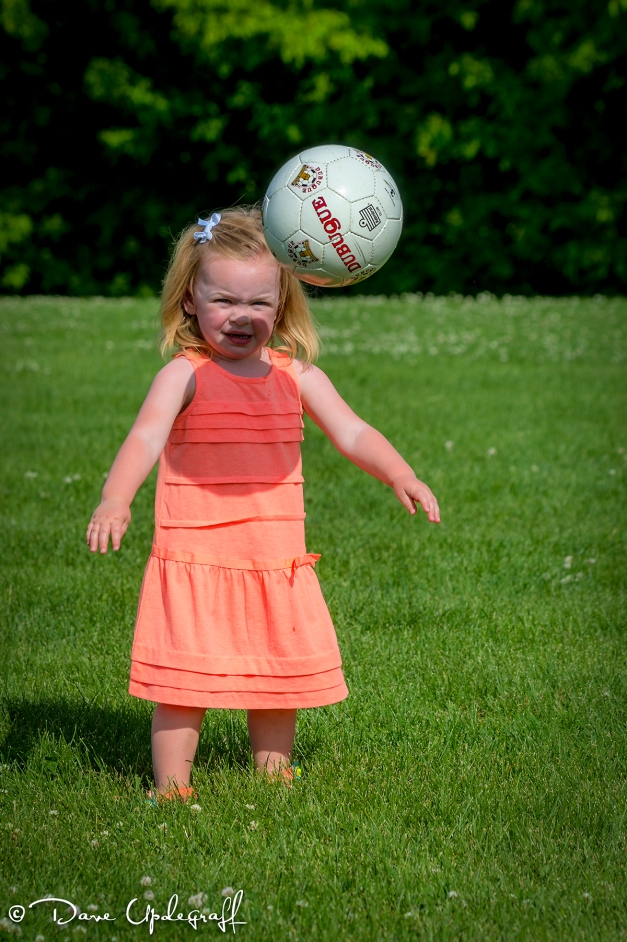 Even Gabby got in on the action.  She had fun running up and down the side of the field.  During one of the breaks she decided to show her skills.  She actually did a pretty good job of kicking the ball.

Angie and Ben bring a little pop up tent to the game to keep the kids cool and out of the sun.  But Gabby could only stay in there so long and then she had to burn off some energy.  🙂

Can’t leave Austin out.  This was his position during the entire game.  He slept though the game and the Grandview Gallop.  I can’t wait to watch him grow as well.

So it was a fun weekend watching the kids do their thing.  I hope to get in another bike ride today but right now the weather looks uncooperative.

It’s been seven months since my cataract surgery and I’m still having the same issues with my eye that I had the day after the surgery.  I have a 3:30 p.m. appointment with my surgeon.  Hope I can get some answers and some alternatives to the situation I have now.

That’s it for today.  Thanks for stopping by the blog.  Tomorrow something other than Grand Kids.  🙂