Some random images for you today from yesterday.  I was ready to head out to watch Josh’s last soccer game of the year and notice this beast on the bird bath.  The water had a layer of ice that had formed during the night and he was perplexed as to how he could get a drink.  I think this is a common crow but I’ve never seen one at the bird bath before.

I captured this image using the Nikon D750 with a Nikon 80 – 400 mm lens shooting though the patio door, which hasn’t been cleaned in a couple of weeks.  So all things considered I’m happy with this shot.

So yesterday was the last soccer game of 2015 for Josh.  It was very cold hovering around 41 degrees with a breeze.  Fun to watch all the parents and grand parents all bundled up and shivering.  The kids didn’t seem to mind the cold as they ran and played.

Give Gabby some raisins and she is happy.  She doesn’t pay much attention to the game but does enjoy being outside.  She was leaning over her chair and fell into my legs.  She wasn’t hurt but scared.  Cried for a long time in my arms (and really had to work at it.)  I finally gave her back to Angie who put her back in the chair with her raisins and she was happy again. 🙂 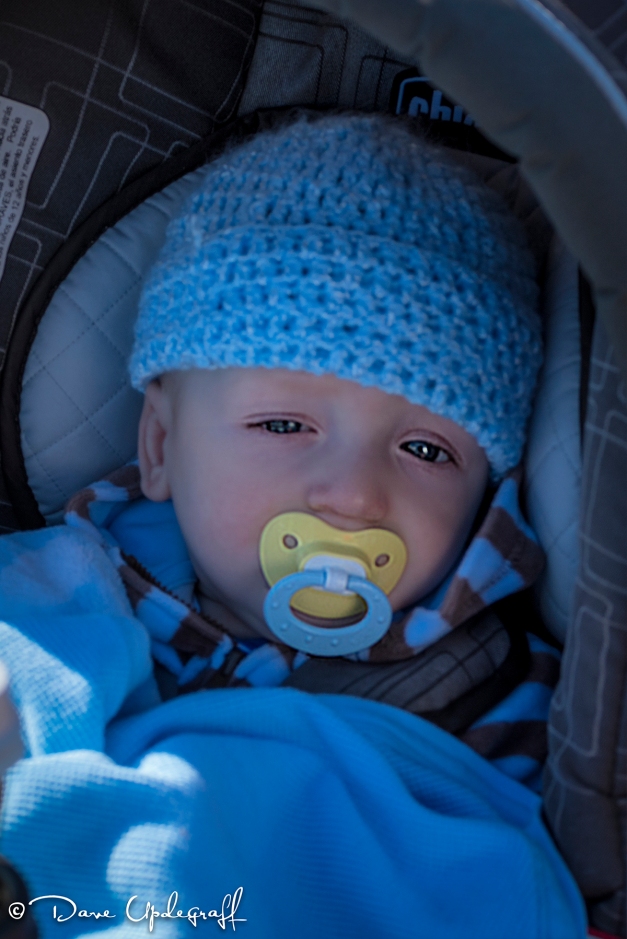 Not a very good shot of Austin.  I was too close for the lens and he was in the shade so some camera shake made this image a little softer than I like.  But what the heck it’s a picture of my grand child so it will work.

Finally, Angie and Josh head back to their car as Ben had taken Austin and Gabby back to the vehicle to warm up.  Fun time with them all.  Josh is now taking hockey and he really seems to like it.  Only problem is his games are at 5:00 p.m. on Wednesday evenings so it will be very difficult for me to make one.  😦