Posted by Dave Updegraff on July 18, 2013
Posted in: Uncategorized. 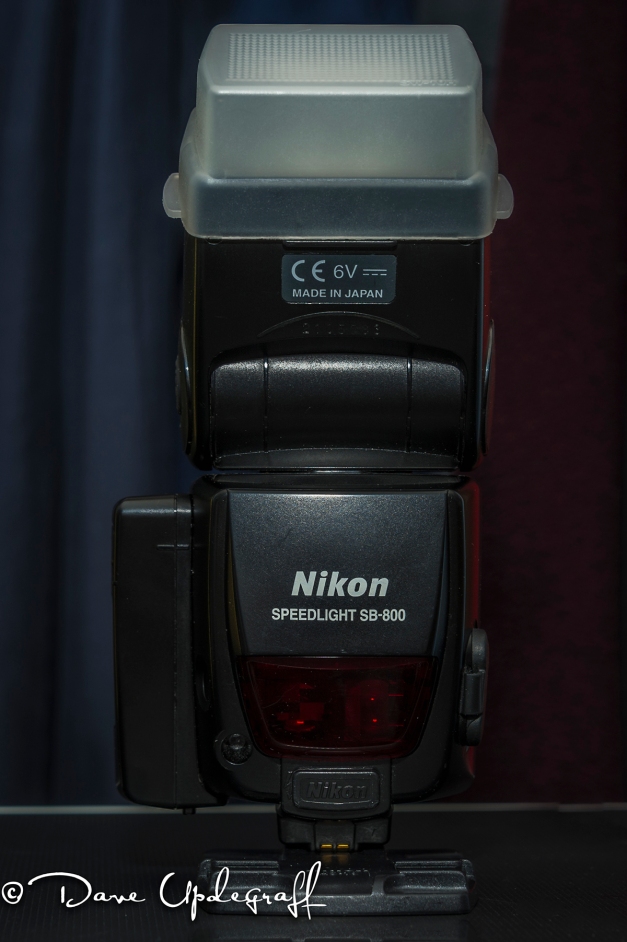 I’ve been asked by several people over the last few days about Speed Lights and why a photographer needs one.  Need is a subjective term.  It all depends on what you want to shoot and how you want it to look.  Each brand of camera in the DLSR arena has its own lighting system and there are a lot of generic speed lights on the market for a lot less money than the name brand ones.

Nikon calls their speed lights (a flash) CLS or Creative Lighting System.  The little pop up flash on a typical DSLR is a small intense light that sets directly on top of the lens and shoots a straight shaft of light at what ever the lens is pointing at.  This is the reason you see so many shots of people with red-eye.  Because in a lighting situation where a flash is needed people’s eyes are dilated and the shaft of light bounces off their retinas producing the annoying red eyes.

One of the key principles of lighting is to make the light as soft as possible.  The bigger the light source the softer the light.  The speed light gives you the ability to diffuse the light by bouncing it off the ceiling or a nearby wall.  That effectively creates a much bigger light source and lights your subject more evenly.  Because the light source is larger and usually bounced from a white ceiling it is a softer light and much more pleasing and flattering.

Additionally when bouncing the light is not practical there are a host of modifiers that can be attached to the speed light to direct a controlled amount of diffused light onto the subject.  With an attached cable the speed light can be removed from the top of the camera (it fits on the hot shoe of the DLSR) and either put on a light stand, table or other nearby object to enhance the light even more.

Speed Lights also incorporate TTL (Through The Lens) metering.  So the camera determines (based on your shutter speed, f-stop and ISO) how much light from the speed light is needed to properly illuminate and expose the subject.  There are manual settings as well so that you can control the light output from 1/16 power plus or minus EV stops to full power.  The TTL also reads the focal length of the lens to adjust the flash output accordingly.

The speed light can also be set up for high-speed sync with your camera allowing you to fire the flash numerous times in rapid succession.  The light gets pretty hot when you do that so you need to be mindful of that.  The SB900 had a heat sensor that was a bit too sensitive for my taste and it would shut down at the most in opportune time because the sensor detected too much heat build up.

I’m sure I have left out some important features and perhaps some of my readers with more technical knowledge can add to this information to this discussion.  But for me I can’t imagine not having speed lights.  I just upgraded to the new Nikon SB910.  It is a much bigger light source and again bigger means softer.  I use them all the time indoors of course but also outdoors to over power the sun.  I put them in soft boxes and either use the commander mode or attach a Pocket Wizard to them to fire remotely.

The Nikon D800 DSLR still carries a pop up flash but the pro grade D4, D3S, and D3 do not have a pop up flash on them.  The little light is just too harsh and doesn’t make for a pleasing image.

I’ve told you way more than I know about speed lights.  I think they are a necessity but then again need is a subjective term.  Thanks for stopping by.  Enjoy your day and be careful.