I was telling you last week that I had added a new tool to my photography tool box and the image above shows it.  It is the DJI Phantom 2 Vision®.  A “Flying Camera.”   It has an integrated 14.5 mp camera that shoots RAW images and it also shoots 1080p video.

I was not interested in a Remote Controlled (RC) airplane, for a variety of reasons.  One I’m not that good with eye / hand coordination.  I don’t like looking up at the sky for long periods of time.  They are expensive and crash often.    What I was interested in and the sole reason for purchasing the Phantom was it is primarily a system to get aerial images without having to get into an airplane.  Since I hate flying I really like that.

It is a GPS controlled flying platform with 4 propellers that spin in opposite directions to help stabilize the camera.  I have watched about two weeks worth of video instruction about how to fly the Phantom and it is a learning curve like any system but it is very easy to get and keep in the air.  Now admittedly I have a total of 3 minutes in the air but I reached an altitude of 106 feet, took some pictures, flew about 100 feet away, returned to my take off point, made a perfect and very soft landing.  🙂 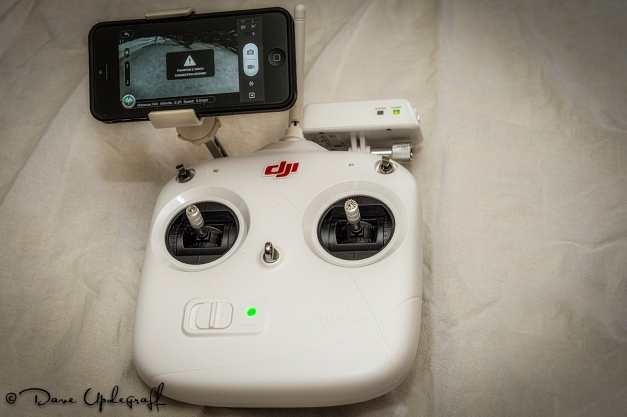 There are a lot of steps to go through to finally get in the air and yesterday was not a good flying day.  I didn’t really realize how bad it was until Jeanne and I got to the launch point.  The temperature was about 29 degrees with a 20 mph wind.  It was colder than a Witch’s heart.  But I couldn’t stand it any longer and had to see if I could get it in the air without hurting it, me, or anything else.  Jeanne got pretty far away from the launch site but came closer when I landed.

As you look at the controller you can see that I have my iPhone attached to it.  The flight controller has a WiFi transmitter (more like a repeater) that picks up the WiFi signal sent by the Phantom and it becomes a network for your iPhone (or Android.)  Once connected to the Phantom network, what the Phantom’s camera sees is transmitted (via an App.) back to the iPhone.  In other words you fly from a first person point of view (FPV.)  Also there are controls on the iPhone App, that let you control the up and down angle of the camera and you control the zoom and angle with the Phantom itself.

What I didn’t take time to do (I just forgot about it) because I was anxious to get the Phantom in the air was to configure the camera.  I did that after the flight but that is why the image below looks so bad.  It had the lowest resolution setting (which is how it was shipped from the factory.)  I didn’t set the video properties up either so the video isn’t very high quality in this clip.

Having said all that it was the most fun I’ve had in 3 minutes that I can remember.  Well like I said that I can remember.  🙂  So I took off from the school playground (which is behind our house) and flew it up and over the trees (then switched to the still camera function) took some images (low resolution) of our home and then flew it back to the play ground.  Did I mention I made a perfect landing?  The video is a little jerky because of the wind and my quick direction changes.

As you watch the video you will also notice that the video shows a 15 degree list to the port side.  That is because the Phantom actually is flying West (sideways) into the wind to maintain it’s prescribed position (North) as determined by the 11 satellites that it had locked onto.

There is no question that I have a lot to learn but like anything practice does help as I have found with my normal photography.  I’ve still got a long way to go with it but I’ve seen improvement over the years.  I just imagine where I can go with this flying camera and the things I can capture images of and I get very excited.  I have a list of over a hundred things I was to capture from the air and areas I want to explore.  The Phantom has a maximum altitude of 400 feet (although several videos on YouTube® have show flights much higher than that.  That is also the FAA’s regulation for UMV flights.  It has a range of about 500 feet in length although again there are a lot of videos with people flying them 1,000 feet away from their controller.

One of the cool things about the Phantom is its “Return Home” feature.  If the signal is lost or if the battery is too low it will go into the RH mode, fly to an altitude of 60 feet and return to the place (within 3 feet) of where it took off.

🙂  Okay since I posted this I have figured out how to add an image to the video, shorten it to the actual 1:05 minutes and at about 10:00 a.m. the original lighting should be back.  It was easier to get the Phantom into the air then it is to show it here.  🙂

That’s it for today.  Hopefully the weather is a little better for flying today.  I have a little more confidence now so I’m going to try one of the areas on my list.  Hope I have some good video to show you Monday and no sad news about any crashes.